Due to the amount of band coverage, photographs, videos and interviews, this year I will have a three part review of Rocklahoma. And many individual band articles to follow. All bands and sites as well as participants/contributors mentioned will be credited on the Day 3 article. Make sure to check back daily for more Twisted Metal from me, Turbo ! 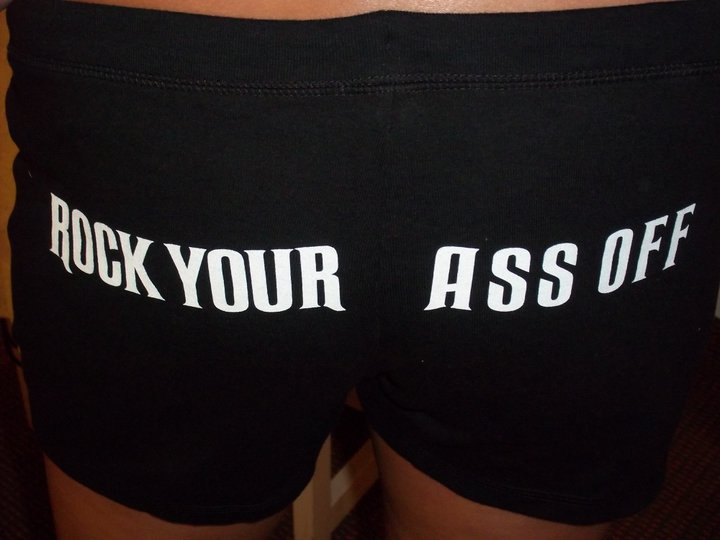 Life, liberty and the pursuit of rock is the Rocklahoma slogan/theme. Feverfest nailed it when they came up with the slogan and logo! Celebrating its fifth anniversary this year Rocklahoma was in its best form ever in my opinion. Rockers, reporters, artists, and production from all over the world came to get a piece of the action! I could feel ROCK festival in the air weeks before. Scores of Rocklahoma fans/contributors in a facebook/twitter posting frenzy just hyped the anticipation for the festival ! Let’s rock! A great way to spend a long Memorial Day Weekend! All Rocklahoma articles from me and dedicated to the men, women and families, past and present who preserve and protect our freedoms and lives. Thank you !

Arriving in Pryor, OK is amazing. It is 40 miles east of Tulsa out in the beautiful heartland and is all country. You immediately get the relaxed down home, small town, positive vibe when you arrive. You then pull up to 400 acres of ROCKLAHOMA !! Many arrived days ahead of time. Packing camping areas, hotels near and far to capacity, months in advance. Three days, three main area stages and even more stages for camping and after hours. (More on those later)

Rocklahoma is a literal carnival (yes complete with rides) of rock. Also vendors from all over the country gave a variety of booths to concert comers that was excellent. You could buy anything apparel related, souvenirs, car accessories, even a Chevrolet if you liked. Along with beer, all kinds of food stands with GOOD eats and ice cold beverages or waters. Its a party …all 400 acres. With something for young and old, classic or modern, and more.

Did you get a chance to go to Rocklahoma 2011? No?? Awww we did miss you, but no worries. Hop in and I’ll take you for a Rocklahoma ride!

Next up was a well balanced mix of modern rocking on the Hard Rock stage from acts including KMOD’s Battle of the Bands Winner, Delay The Day. Also New Medicine who really keep the rocking loud and proud. Fantastic show from them. Texas Hippie Coalition and Jonathon Tyler & The Northern Lights also gave awesome rock shows on the Hard Rock stage. Sick Puppies are one of the most talented trio musically that I have ever had the pleasure of watching Live. All the way from Australia, America was happy to show them how glad we were that they played Rocklahoma! Every note, every chord this band was the hammer…they nailed it. If you can get a live show ticket for them, grab it quick! 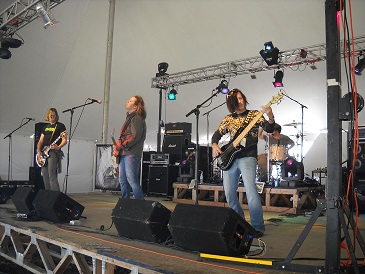 The first band to take the Retrospect Stage was Pretty Little Suicide. As soon as they got on stage, you could feel the energy rising. And when they began to play their set I knew why. These rockers from Boston, MA have a unique but familiar rock that makes you want more and more. They manage to mix their influences such as GNR with their own modern rock style and add talent and dedication to their show that’s undeniable. Mike Patton comes together with his guitar as one, while Izzy Rock the drummer creates a drum line explosion of power. J.C.s bass line is a guitar wave that brings it all home as Ed Earle of Los Angelos melts you with vocals that you don’t just hear but you feel, head to toe!! AWESOME show! These guys played Fryday and again SunFunday we wanted MORE! I had a chance to visit with them in an on camera interview and I can tell you right now, these guys are here to stay and rock your world! You can get their self titled Debut CD now all over the net.

Words fall short to review this next Retrospect stage performance. They are the REAL deal in rock n roll. FIRSTRYKE originally formed in 1984 when two of Tulsa OKs best bands, Slayer and Lazarus combined forces and headed for the stage. Twenty seven years later they are still rockin’ with Rick Adams blazing through deep gritty rock lyrics with ease. On stage these guys are a cut above. They put on an incredible concert! Lights, guitars, sound all combined in just the right time! When I walked away from this show way late into the night, I still had a huge smile on my face from having a blast! 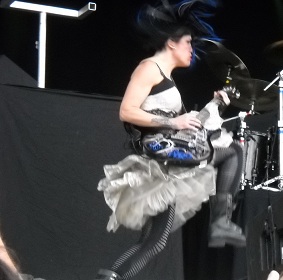 Back at the Main Stage, next up was the band that I would say stole the event. The best of the best. One word, Skillet. The American Christian Rock band formed in Memphis in 1996 originally. Skillet served up an opera themed ground pounding, full blown show. Jam packed with energy and raw power. They used smoke, hydraulics, violins, and every other tool the stage had to offer along with their own talents musically to beautifully deliver one of the best concerts I’ve ever seen. The hard hitting drummer Jen Ledger has the voice of an angel. In the air all I saw was every fist raised and rockin’. Hard Rock in its finest hour.

Where was the party you ask? Well it was on stage..with Hinder! They are also one of my top shows of the Memorial Day Weekend. Austin Winkler really knows how to get a crowd rockin’ and having the time of their life! Excellent drumming. Guitars that scream your name. WOW! Austin Winkler took a stroll all the way through VIP to General Admission to serenade his crowd and we loved every minute of it. I also had a chance to interview Austin and Blower (Joe Garvey) so watch for that interview here at Kick Acts. 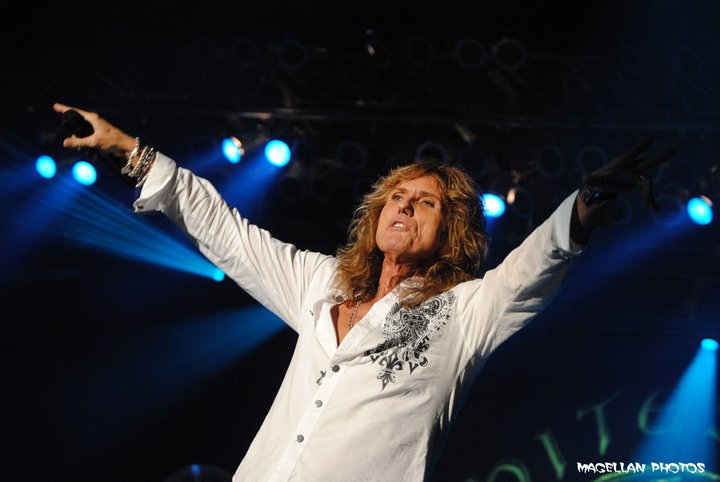 To wrap up Friday, of course it was Whitesnake. Three decades of rockin’ and David Coverdale and the rest of Whitesnake still is as strong and talented live as ever. Whitesnake released their latest record, “Forevermore”, their eleventh album in 2011. The crowd LOVED this show. And so did I. There was no Still of the Night in this concert.

Being true to you the reader I do have to say there were some noticeable sound glitches on the Hard Rock stage ~Fryday~. However they seemed to be worked out and the show went on. Rocklahoma regrouped in 2010 and made several upgrades to the facilities and combined the lineup to be the best of several generations of rock/metal/modern and indie bands to have rock music to offer just about any ear. It was a success. After clicking a few photographs with friends from past Rocklahoma family members and locating Camp Jagar (more on that very soon) the day was night and rolling into Saturday. Time for some zzzz’s well OK (to be honest) three hours of sleep. I don’t wanna miss anything!