1. Welcome to Kick Acts. Tell us a little about yourself and your band and were you
can be found at on the web.
We are Crucifuge, formed in June 2010 and are based in Evansville, IN. We’ve
recently finished the mixing/mastering of our full-length debut album. 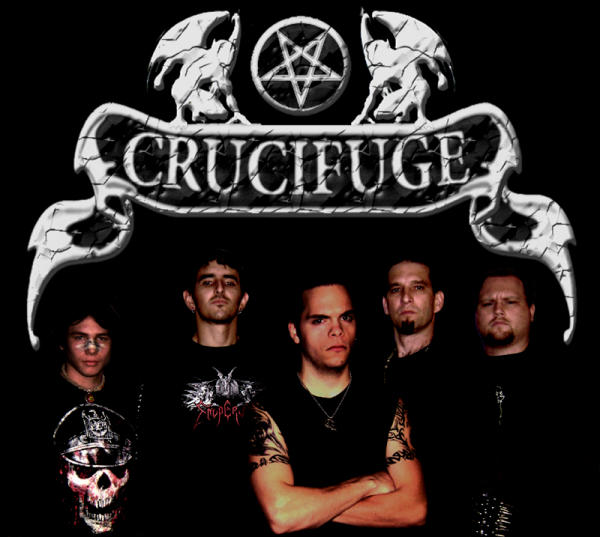 3. Do you have any advice for someone just getting started in playing music? Any
pitfalls they should avoid?
a.) As long as you are playing in time and in key, you’re doing it right. No one
will believe in you more than yourself. If you have no belief in yourself, no
conviction in what you want to accomplish, and lack a cohesive understanding of what
you want to accomplish with your band-mates, then you are wasting your time.
b.) Stay away from “rock stars”.

4. Do you have a greatest gig story you’d like to share?
Not really. All gigs are good because it’s an opportunity to showcase our music.
Being on stage is the best feeling in the cosmos.

5. On the same token as the above question. How about a “worse gig” ever story.
Not really, as stated in question four. All gigs are good because it’s an
opportunity to showcase our music. Having a lack of roadies to set up and “tech”
our shit, then tear it down, haul it, etc. sucks though.

6.Do you have any other hobbies other than playing music? Collect stamps?
Collect hats from off the side of the road? Draw pictures of boobs?
All of us have a diverse range of outside interests, most of them legal.

7. What do you think about the present music scene or lack of here in the Evansville
area? Care to address that?
You have to spend money to make money. We see a lot of good bands in the Evansville
area. We see a lot of good bands with poor turnouts at shows because the extent of
advertising for the show was primarily on Facebook or Myspace. Radio is a powerful
media. Bands should be using it to promote shows they’ve put together.Spend a
little, make some more…

8. Tell us something about each of your band members that we wouldn’t expect to
hear… Like their hobbies or something like that…
Ryan and Kaven listen to all genres of music. Despite the anger in his lyrics,
Jesse is a kind-hearted person. Nick went to Catholic school. No one knows
anything about Sledge and he evidently has no intentions of sharing.

9. Hypothetical situation. You’re stranded on Gilligan’s island and you getto hook
up with only one of the girls… Is it Ginger, Mary Ann or Mrs. Howelland why?
Only one? Not going to happen…Ryan and Kaven tag-team Ginger (Kaven will
sodomize, he doesn’t mind), Sledge puts the hurt on Mary Ann deep-south style, Nick
gets a little Gmilf action with Mrs. Howell and Jesse has to just sit and watch
because he has a girlfriend.

10. # 10 is called “Shout It Out Loud”. It’s were you get to talk about whatever you
want to talk about. So go ahead and “SHOUT IT OUT LOUD”!
Live your life. No one is going to the grave for you. As well, you can’t live
someone else’s life for them. So sit back, shut the fuck up and let them live it.