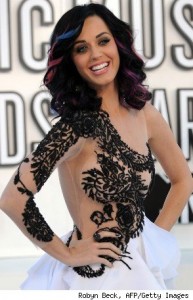 Say what you will about Katy Perry but she is the real deal, the whole package. Currently she is tied with Michael Jackson as the only other artist that has  had five chart toppers off of one album. That’s not an easy thing to do and if this song is anything like the other five it will have no problem doing it so I will go on record now as saying she will be the only artist in history (that means Elvis, The Beatles, Michael Jackson and everyone else included) to have six chart toppers off one album.Congrads!!

She may be poppy,  funny and quirky but she is brilliantly smart and knows how to present a song and a video. I used to think only PINK was a sure bet but now I have to rethink that. There is room at the top for both of them. Here is Katy’s new video and she plays two roles in it. One as herself now and one as an eldery woman. As my friend Louie used to say on his radio broadcast “Check it out and tell me what you think”.