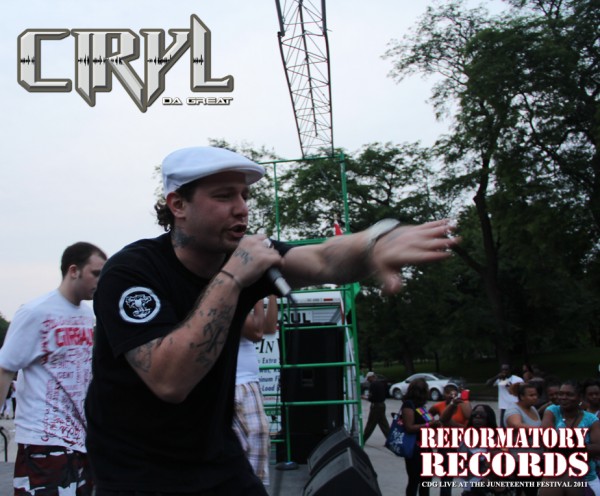 What up its ur boy ciryl da great, im 24 im signed reformatory records outta Chicago,,. That’s the family. Im also the founder and v.p of bad image m.g.l, I been rappin for 12 years and cant stop. It flows thru me, in my veins cut em open and u’ll see lyrics lol. Me and mike met bout 3 years ago and just something clicked, we mesh well and Im glad to call this place my home.

U can find my debut album “da birth of a great 1” on itunes, amazon, napster etc. u know the drill follow me on twitter @ciryldagreat. , I’m everyone the internets a motherfucker lol

Eminem and the diplomats. Theres more but I believe those 2 r solely responsible for me being me. Em brought out that “ima kill u” and have people except and even be on ur side by the end of the first verse. It’s a powerful thing when u can make somebody feel empathy just by listening to word u wrote. Its fuckin amazin, it still gives me chills. And as for dip set. They were the apitomy of battle rap, these dudes were fuckin sick. Hell rell 40cal juelez, cam, j.r.writer un kasa, nuff said. They made it cool to be a gangsta again and even though I aint tryin to embody that, it was def something that helped mold me

3. Do you have any advice for someone just getting started in playing music? Any pitfalls they should 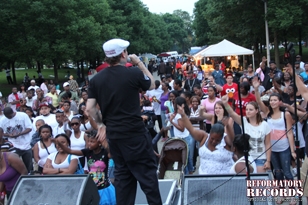 Id say watch ur ass, don’t believe everything they tell u. just do u and perform as much as u can. And what mike always tells me “keep ur mouth shut and ur ears open” that’s def. m,y best advice, everything else kinda comes to u as u go there aint no guide book for this shit. Bvecause everyones experience is diff.

Lol lame but I watch jeaopardy and play madden that’s my shit. Other then that it’s the rap channel 24/7 in this mother fucker

Hell yeah I’ll address it. Its fucked, too many captains not enough ship hands. At the end of the day someone needs to convince us to work together. We have the most hateful community out of all the music genres and it makes me sick. That’s y here at refo we do us, and if u aint wit that, den get off the bus lol

8. Tell us something about each of your band members that we wouldn’t  expect to hear… Like their hobbies or something like that…

9. Hypothetical situation. You’re stranded on Gilligan’s island and you get  to hook up with only one of the girls… Is it Ginger, Mary Ann or Mrs. Howell  and why?

mary anne, if we ever got rescued I could see myuself being with her country ass. Ginger would just want the money and fame fuck her lol

I wana say thanx to everyon e who made this happen and continues to help make this happen. I love all my fans and id be nothing without u guys. My label , my family, my haters iots everything right now. I keep rising and I know it takes a village to raise a child , well since February 25th 2010 ive been the child dey raisin. And I think they doin a pretty good job. Send my love to white boy and nstrmntl . come home soon yall.

In your answer to #7, you said “We have the most hateful community out of all the music genres”. My question is, why is the rap community so violent? Or at least it appears that way to someone that is not in the rap community. I see East Side versus West side..East Coast against West Coast, and look at how much talent is has cost… Biggie..Tupac..etc

i think that the violence comes from the relation between our genre and drugs. Everybody wants to be scarface, everybody wants to be the dope dealer/gangbanger and they embody this in their music. Tupac rapped about thug life and everyone went crazy. what people seem to forget is that tupac was a thespian/dancer before he became a thug. stuffs sickining that all this talent must be sacrificed just to keep someone elses cred valid.

Without looking up it on the internet, do you know who “Rita Repulsa” And Lord Zedd” are and how do you know?

lol no, sorry can’t say that i do. Is that people off the power rangers?

Should singers and bands also be political too or just make music and Keep their opinions to themselves and not go “Bono” on everyone?

opinions are just that an opinion, no one has to believe or respect it. and just because we’re in the public eye does not change who we are and how we feel on the inside. i say be as political as you want, but be able to accept the consequences. piss off the wrong group and your screwed, its a viscious cycle. honestly though, i’d rather be honest with the fans from the get and let them make a decision that will stick.

At what should someone that hasn’t made it give up on their dream and get over it or should they ever give up?

When i started, i gave myself till i was 25. i said if im not broken and making substantial money by then, i’d hang it up. this is what inspired me though . it lit a fire under my ass. me giving up and walking away never sounds likely, its in my blood. and i think if you feel how i feel , you’d say the same. i guess it depends on the heart and talent level

of the person, i look at my camp and hope none of us ever give up. so there you go. 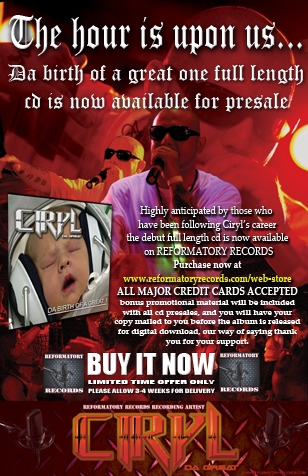