This poor guy has been ordered to death for CONVERTING to Christianity after being a muslim. I am not even gotta capitalize mudslim. Why is it such a big deal that he has to be put to death? This guy didn’t kill someone or commit some horrible crime that deserves this kinda of punishment. He simply accepted Jesus as his Lord and Savior and not Muhammad.

Here in America you are a fool if you think this in not a violent religion or  you are turning a blind eye. The majority of Americans consider themselves Christians so the majority of you could possibly be put to death for your “faith” if  some leaders of the muslim community had its way. This religion needs to kept in check somehow some way or they need to update to the 21 century where you can believe in what you want to, even if its believing in frogs or trees, and not have to worry about someone ordering you to death for not thinking like they think you should. It’s still in the dark ages… Not that Christianity is perfect but the “Church” is not ordering the death of everyone that is jumping the bible ship  and headed toward Mecca.

Jesus said “To love your enemies”

Here is the story…

A trial court in Iran has issued its final verdict, ordering a Christian pastor to be put to death for leaving Islam and converting to Christianity, according to sources close to the pastor and his legal team. 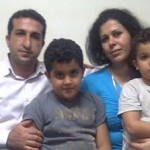 Supporters fear Youcef Nadarkhani, a 34-year-old father of two who was arrested over two years ago on charges of apostasy, may now be executed at any time without prior warning, as death sentences in Iran may be carried out immediately or dragged out for years.

It is unclear whether Nadarkhani can appeal the execution order.