I’m originally from Sullivan, Indiana. I’m married and have three children and a grandchild.  After high school, I attended Indiana State University where I earned a degree in Art Education. But that wasn’t enough, so I decided to become a professional wrestler. I eventually reached 650 pounds, and I toured around the country in one developmental league or another. Eventually, I realized I was feeling the Blues – actually the Black and Blue marks all over my body. I came to the conclusion that wrestling is a stupid way to make a living. So I bought a guitar and started playing the blues. I began by playing guitar with a Christian Rock band, Secret Service and then the Passion, Moreover’s New Trick. This lead to an opportunity to tour extensively with Larry Norman, recording two Live CDs with Larry.  I also was a part of two documentaries.

Eventually, after going through some membership trial and error, I finally found music brethren in Jimbo Alonso and JD Blue. Jimbo’s a retired/reformed heavy metal drummer, now graduated to the Blues. JD Blue is the quintessential Blues Bassist, with the ability to not only play with soul and authority, and also stay in the pocket.

We’re fortunate enough to be endorsed by several musical instrument companies, including Tradition Guitars, Adams’ Amplification, and Saluda Cymbals.  We record for Benevolent Blues Records, and are managed by B3 Entertainment Consultants. 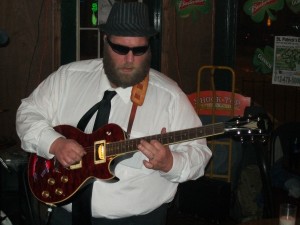 2.Who are your musical heroes, influences & why?

My first one would be The Beatles simply because they were my first introduction to Rock music and songwriting. Eric Clapton, for his phenomenal guitar skills. Delaney Bramlett mainly for his musicianship and his singing. Of Course Larry Norman. Jimi Hendrix for his inventiveness with his guitar. Tracy Garcia, who was one of my early guitar mentors. He took me under his wing and taught me to play. Jim Seprodi for introducing me to more obscure songwriters. He taught me how to write and arrange songs. Finally, Lighting Hopkins, my first real Blues Record, which I wore out, driving my brother crazy in the process.

3.Do you have any advice for someone just getting started in playing music? Any pitfalls they should avoid?

Be a student of your craft. Learn the history, the influences. Buy their CDs and really study them. Learn the materials well. Practice, Practice, Practice, Practice. You can’t do that enough. Be patient. Realize that overnight success is a myth. Keep at it. Keep trying. Don’t listen to the naysayers. Keep focused on your goals and keep working toward those goals. As long as you are truly working at it – and not just playing at it – you will find success. Finally, don’t be afraid to relocate. The music world is out there, but it may not be in your backyard.

Playing at the Cornerstone Festival and Creation West with Larry Norman. The Main Stage. The Big time for Christian Rock. There were 30,000 in the crowd at Cornerstone – 20,000 at Creation West. But you got to understand, I grew up listening to Larry Norman. He was my hero. To be playing two major festivals with your hero is something special. Sort of like a high school basketball star getting to play with Kobi.

This one is easy, and it involves Jimbo. I met Jimbo through a Craig’s List add at rehearsal for the Eddie Austin Band in Bloomington, IN. We were going to tour out to Denver. Eddie was a country/Southern Rock guy. We were promised a set amount for each show. We got to Denver – January 29 (my son’s Birthday). We discover that not only are we playing for the door – after driving all the way to Denver – there were four people in the audience. We got $10 apiece. The next night was actually worse. So Jimbo, the bassist and the bus driver and I decided to quit the tour. We took the bus and headed back to Bloomington. Eddie came back with us – a rather long ride, especially for Eddie.

I still love professional wrestling, especially the old school wrestlers like Jerry Lawler, Ric Flair and those guys. I went to the King Harley Race’s Wrestling School. Got to take my son, Russell in and he received a belt from Harley.

I love astronomy, and anything to do with quantum theoretical physics and alternate universes.

In Terre Haute, there is a growing live music scene. There are some very good bands, especially within the B3 group. We got some truly outstanding bands in that roster, and I’m proud to be one of them. There are a limited number of venues, and they all seem to want the same types of bands, which tends to stifle creativity. So those of us who are creative tend to play a lot out of town. Fortunately, we have found several great places in Indy and Bloomington as well as other location, such as Bedford, St. Bernice, and Clinton, among others  in Indiana, as well as Brockton and Bridgeport, Illinois, who not only love original music, but prefer it to cover tunes.

Jimbo Alonso was a professional Roller Derby Referee for several years. He is a certified Roller Derby Ref. If that is possible. He also appeared as a guest on the Jerry Springer Show. 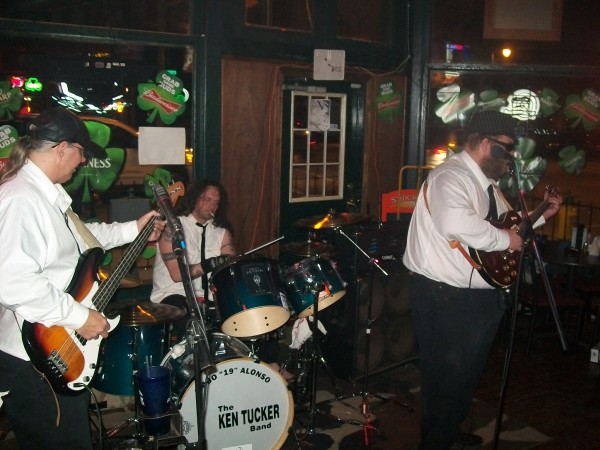 MY wife has been the most supportive person in life throughout all my ups and downs. She’s been out there slugging it out in the trenches with me.

My kids are great. I love my grand daughter!

Over the years, I’ve had many people tell me that I should have given up, not because I am a bad musician, but because it has been such a struggle. In many ways, I’ve been living the Blues. Now I have a great team of people who believe in me and are behind me. With them behind me, I know there is no limits to where I can go in the music business.

As the risk of sounding stupid, no I do not.

Should singers and bands also be political too or just make music and keep  their opinions to themselves and not go “Bono” on everyone?

It’s up to the individual. I personally don’t do that. My views are nobody’s business. But I will say that those who do risk alienating the very people who brought them success – the fans. Everyone has their own viewpoints. It’s not our business to prosthelytize. It’s our job to play music.

At what point should someone that hasn’t made it give up on their dream and get over it or should they ever give up?

There are some musicians who want to make it big who just may not have the skills. It requires a lot of self-examination. I watch other Blues guys on TV, and if I can honestly tell myself that my music can stand up to what I am hearing and seeing, then don’t quit. This may require working on your skills and overall musicianship, taking it up a notch. It may also be time to start networking, reaching out to venues, festivals, fans, and even other musicians. But sometimes who need just keep working it, keep polishing your skills, polishing your act, tweaking and working it till you find that combination that works.

To Book The Ken Tucker band contact Robert at

Check out some of KICKACTS other interviews here!