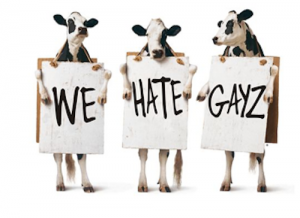 An open letter to the protesting…

Please help me understand something here… You preach acceptance, and tolerance. It’s your “Cause”. It’s what you believe in.Absolutely nothing wrong with that.  But when someone doesn’t accept you for what you are, you go into hate mode. Take for instance the “Chick fil A” issue. The President of that company simple expressed his opinions on Gay marriage and what happened? A huge back lash against the company with Boycott’s, emails, threats, protests  and other “intolerable” acts. Why can’t you just accept it and move on? Is everyone’s acceptance that important to you? And in reality, you can’t accept his opinion but you’re trying to force him and his Company to accept yours, so who wins here? Who’s right and who’s wrong?

Look, I don’t care if you are gay, straight, bi, transgendered, or anything else for that matter and why would you label yourself something anyway. That’s a form of self separation too… But for a group that seems always in your face to accept you or your gonna regret it, that’s not fair to the rest of us. In life, not everyone is ok with everyone and everything…It’s just how it is. “So what” if someone’s opinion doesn’t agree with your way of thinking? Don’t act like a spoilt brat that’s not getting his or her way and scream at the top of your lungs and throw things around until you force someone to change. That’s not winning people over. That my friend is “BULLYING”.

Bullying is a form of aggressive behavior manifested by the use of force or coercion to affect others, particularly when the behavior is habitual and involves an imbalance of power. It can include verbal harassment, physical assault or coercion and may be directed repeatedly towards particular victims, perhaps on grounds of race, religion, gender, sexuality, or ability.[2][3] The “imbalance of power” may be social power and/or physical power. The victim of bullying is sometimes referred to as a “target”.

The “target” according to what I read in the news and all over Facebook is “Chick Fil A”..So what does that make you…? The “Bully”.

Don’t hate on me… I accept people for what they are or aren’t. I don’t care about your bedroom preference. In reality no one should care about yours or mine or be defined by it, or yet, define themselves by it…How bout we’re all humans instead. But for those that do define it by that, just accept it and go on. What is that old saying? Like water off a ducks back?

If you don’t like what the President of Chick Fil A said and you feel like not spending your money there… That’s fine. But to turn this into a shouting down match of everyone that doesn’t agree with you is pointless and really shows the rest of the world (those that don’t accept your lifestyle or preferences) how little you really are for “acceptance and tolerance”. It’s the old “repent or die” mentally just with a different approach this time around.

You really want to make a difference? How about forgiveness and love toward those that don’t accept you instead…Win them over with kindness.

Feel Free to re post this article in its entirely linked back to www.kickacts.com