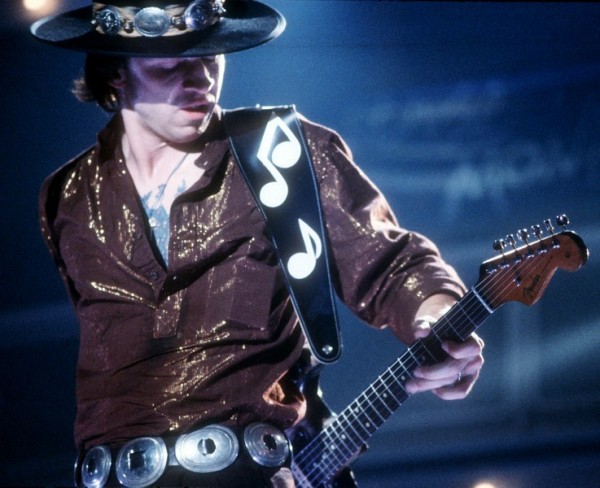 “The House is Rockin”

But, after Eric Clapton finished his set, at 11:55 pm – to ear-deafening applause – he introduced “the best guitar players in the entire world.” One by one, Buddy Guy, Stevie Ray Vaughan, Robert Cray, and Jimmie Vaughan all strolled on stage with their Fender Stratocasters for an encore jam to Robert Johnson’s “Sweet Home Chicago”, a fitting tune as all of the musicians were home-ridden to “Windy City”. After 20 minutes, they finished off the tune, the lights went up, and the musicians strolled off stage. Stevie Ray Vaughan was last off stage, giving one final good-bye before he disappeared into the darkness of backstage.

Thinking ahead, tour manager Skip Rickert had reserved helicopters from Omni Flights to bypass congested highway traffic after the concert. The helicopters chosen were Bell 260B Jet Rangers, which were enough for five people to be seated, including the pilot. Seats were reserved on the third Bell 260B Jet Ranger for Stevie, Jimmie and his wife, Connie. However, a miscommunication between Stevie’s and Eric Clapton’s management happened, as three members of Clapton’s staff – Clapton’s Hollywood agent Bobby Brooks, body guard Nigel Browne and assistant tour manager Colin Smythe – took three seats on the helo.

Leaving only one seat on the helicopter, and with SRV being anxious to get back to Chicago, he asked his brother, Jimmie, if he could take the last seat on the third helicopter. Since he didn’t want to be separated from his wife, Jimmie told him that was fine – the couple would just catch the next helo flight to Chicago’s Midway Airport.

In the dense fog and pitch-black night – later described by a corporate pilot who attended the concert to NTSB officials as having a vertical visibility being good and horizontal visibility variable, though at most times more than a mile – the helicopters were clear for lift off at 12:40 that morning.

Greg Rzab, a member of the Buddy Guy blues band who was on one of the four helicopters, said that the fog, and condensation sticking to the helo’s exterior, were thick on takeoff. “We kept wiping the glass bubble on the copter … and after we got up 10 feet, it fogged up again and we couldn’t see,” Rzab said. “I turned to Buddy and said, ‘This is really bad,’ and Buddy just looked at me and said, ‘I hope they know where they’re going.’ ” Just past the lift-off zone was a 300-foot hill.