I really want to start off and say “Are you that STUPID” but I won’t. But most kids don’t need meds to control them. But I am going to back up here. Medicating kids for ADD, AHAD, ABC and OMG and every other acronym you can think of started way before today. But in today’s society it is in a full blown epidemic.

Just the other day I saw a 20 something year old mommy tell her 5 year old that its time to go home and take his sleep medicine. I already know the kid is on mood medicine because he is “hyper”. What a crock of shit. You know what the majority of the problem is?

It’s you. THE PARENT…

I was a Ritalin kid too in the 70’s. I too was “hyper”. I was told that if I didn’t take it daily  I could die. So yea, there are some old issues there but in reality you know what I needed? As   old Dr. Kennedy once told my Mom (grandmother, another story)…He said “Nadine, you just need to bust his ass”.

When kids are unruly they don’t need meds to chill them out. First off, unlike most of you adults that also medicate yourself with Lortabs, Adderall, and or Vyvanse, because, well, life to is just too hard for you. A kid has an unlimited amount of energy and all you have is excuses. They are still growing. Muscles need working out. Legs need to run and jump. They don’t need to sit in front of a tv all day or play video games all day. I don’t think there is anything wrong with video games or tv but kids need to be outside doing what their growing bones need. A good work out. Everyday. not just for 30 minutes in P.E. if they have that.
Since the 1980’s most kids born after that didn’t go out and play like the kids born before that time. Those kids grew up and became parents. So now those parents  really have no parenting skills. You listen to Dr. Who de Do, or who ever and put your precious children on drugs. Legal drugs but still drugs. You are raising a generation of zoned out and tuned out kids. Timothy Leary would be dancing in tall cotton. Tune In and drop out…

one reason could be because.. 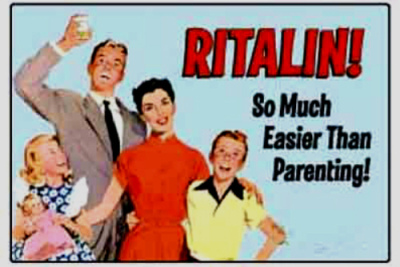 “Busyness of parents.  Often as busy parents, our children often suffer attention deficit disorder, a deficit of attention by the parents.  Oft times the kids will act out just to get their busy parents’ attention.  An interesting, but sad side note is that it seems some of the highest percentages of children on medications occur in more affluent suburbs.  Is this because the parents have access to conventional medical care and insurance, or because they’re too busy to want something more lasting, more permanent in results, or is it because they are used to dealing with their problems with medications such as Prozac or Valium.”

Is there any hope for our kids? Go here:

I really don’t mean to offend you as a parent but why do you do this if you are? I realize some parents don’t medicate their kids but I suspect the majority do. And why? Because you feel they need it or the doctor tells you to. Look at these Stats. I underlined some of it and highlighted it in RED….Please slow down and pay attention

“Over promotion of ADD as a main stream condition.  Studies done ~12 years ago showed that 3-5 percent of school age children exhibit ADD-like behaviors.  Of the 70 million school age children that means that ~4 million children exhibit the symptoms.  A potentially huge market for pharmaceuticals.  So companies like Novartis (makers of Ritalin), makers of Dexedrine, Cylert, Adderall began heavily promoting psychotropics as the “one-pill-cures-all” fix for ADD.  “Grass root” non-profits such as C.H.A.D.D. were funded by the pharmaceutical companies with the inevitable result that they began to promote psychotropics.  The American Psychiatric Association (also funded in large part by the pharmaceutical companies) began to promote psychotropics as the solution for ADD.  With billions in revenues, hundreds of millions of dollars has been spent promoting awareness of ADD in the American society with the consequent promotion of psychotropics.  The sad, but inevitable result is that 90% of the world’s market for Ritalin is in the USA.”

So in America, Parents don’t want mess with their kids. Schools don’t want mess with the kids. So you throw them away to drug reps (Legal drug dealers) to make a buck off you by prescribing your kids meds to “control” them. It’s that old adage for your kids…”Out of sight Out of Mind”. But in reality, if you kid is unruly you bust their ass (that don’t mean beat) but for God’s sake don’t put them on drugs because you can’t handle their rowdiness.

How do we get out of this mess?

I don’t claim to have all the answers but for one, if you are a parent and you self medicate. You need to stop. You need to slow down. You need to spend time with your kid. I don’t want to lay a guilt trip on you so don’t take it that way. Just open your eyes from the fog. Some kids need meds for being sick, allergies and aliments. I get that. But the majority of kids on mood meds and sleeping pills just need an outlet and not an inlet to drug use. You as a parent, take them to the park. Buy them bike and make them ride it.  Take them walking. Let them interact with other kids in real life and not a virtual one all the time. In the late 70’s and early 80’s kids were always outside. These days they are holed up in the house. It’s time to change this. Buy them a basketball and take them to a ball court. In other words, DO SOMETHING before its too late…

You have a gift, a gift from God. Don’t poison them with all that junk. Let them express themselves. Let them be creative. Stop letting Doctors and drug reps turn them in zoned out zombies…They are your kids not theirs….educate and not medicate..discipline and not poison.

my email box is open