This was submitted by my fellow metal sludger Huey Ramone.

He has pretty bad ass band called deathsquad demongods that we will be interviewing shorty. But in the mean time go by and check out his  bands’ page here. http://deathsquaddemongods.com/

Here is his review of the Marilyn Manson show! 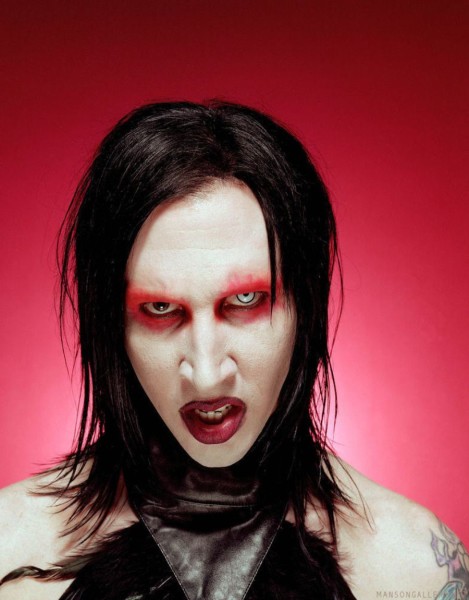 So I was given 2 sweet ass front row tix to see Manson last night. I wasn’tt gonna go, cause of how far from grace he’s fell, but they were free, so It sounded great.

Butcher Babies opened up, and I swear to god, that was the worst shit ever. Good god, that band sucks ass. The guitarist had about 14 strings on his guitar and the entire soundtrack for their set was just one long WHIRRRRRRRRRRR.

The two chick singers sucked total ass too. The hot blond one held down some weak ass ROARRRRRRRS with the help of a harmony unit that did nothing to bring her into Angela Gossetness, and the less hot one just did much of the same shit too. The two fake tit singers didn’t even strip down, and they tried their best to get the crowd interested, but they just weren’t havin’ it too much.

This vid is from a couple days prior, but it’s equally craptacular:

So Manson comes on, all fat and with a terrible haircut, but for a couple songs he actually does pretty good. And Twiggy was in a fucking cool outfit and had some of the coolest fucking guitars. BC Rich Bich, Blackie Lawless style Widow guitar, Mosrite, Pink Mockingbird, Chrome Flying V, Les Paul, etc. Like a different guitar for every song. We’re off to a good start!

Here he’s doin’ Disposable Teens, the 2nd song, from further back in the venue:
http://www.youtube.com/watch?v=BANOBl7yW5g

So Mobscene is the 4th song, and here it kinda falls apart. he’s tired, he’s winded, and he totally fucks up the 1st prechorus:

Coma White was cool. That song’s bad ass, and the snow was falling on me as it went. You had to be there i guess:

Look at Antichrist Superstar. He tosses some mics to the crowd, and 2 bibles, which is cool, but he’s more interested in pulling up the fallen props, he can barely be bothered to sing. And the 2nd verse it with bible pages in his mouth. It’s like he’s cool with being a goof.

He ended with Hate Anthem. Spent so much time trying to hold the “Fuck it!’s” that he’s miss the next one and be out of breath. What’s the point???? sigh.

it was all over after about 70 mins. But It was ok…. You kinda realized he had given all he had left in the tank. I needed to get back home for work anyway.

I give Butcher Babies 1 star, and hope the record label drops them before the record comes out.

Manson? Sigh. Totally worth it and a fun night (especially for free…. the face value on the tix was $60 + 14.00) but it’s just sad how far he’s fallen from godliness to comic/parody.