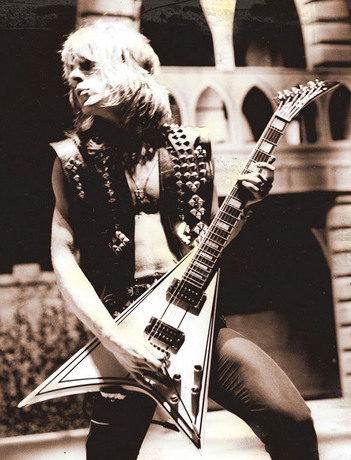 3.19.82 – The lead guitarist of hard rock star Ozzy Osbourne’s band and two others were killed today when a plane in which they were buzzing a mansion slammed into the home, deputies said. Guitarist Randall Rhoads, 25, formerly of the Los Angeles-based group of Quiet Riot, pilot Andrew Aycock, 36, and Rachel Youngblood, 58, were killed in the 10:30 a.m. crash, Lake county Deputy Sheriff Mike Smalt said. He said that the plane clipped a van and a tree before crashing into the two-story colonial house. Osbourne, 33, was in the van when one of the plane’s wings clipped it but escaped injury. The chunky former Black Sabbath lead singer in his two-year solo career has become known for such outrageous stage antics as biting off the head of a live bat. He was recently arrested for relieving himself on the walls of the Alamo. Several other members of the group were inside the home but fled before the structure was gutted by flaming gasoline. Rhoads and Youngblood, the group’s hairdresser and makeup artist, were from Los Angeles, Smalt said. He said Aycock lived at Flying Baron Estates, the private airport community where the accident happened. The group was staying at the mansion before a concert that had been scheduled in Leesburg late today. Jack Barker, Atlanta regional spokesman for the Federal Aviation Administration, said the aircraft was a Beechcraft Bonanza. He said the agency flew an investigator to the scene.