Before we took far separate paths as adults we were two little toddler boys that only had each other to rely on and to hold on to as our world was turned upside pretty much from the word “go”. I couldn’t have been any older than five  and I clearly remember and can still see that when our “mom” would get pissed off she would shout at us she was going to jump in the “Goddamn river” and she would make us watch as she packed her suitcase and left my little brother  and me all alone in the house to hold each other in the living room floor and cry after begging her to not go…”Please don’t go mommy, we won’t do it again”… whatever “it” was that caused her to flip out…Me, being the oldest I tried to protect my little brother during these fits she had… This was repeated over and over for whatever reason and seemed to come out of nowhere and happened over and over our entire life growing up. We lived about 3 blocks from the river. 531 second street was the address. It was a straight shot up Second Street, thru 3 lights and then the boat ramp. And I all I could think of each time was mom’s car was sinking in the river with her in it. Her hands on the wheel and we caused it…But we weren’t bad kids. Hell, we were little kids. Her reason for doing this I still don’t know to this day. Another thing she did was lock us in separate closets. He (my brother) would be locked in her closet in her bedroom and me in our bedroom closet. I remember time after time sitting in the dark on that trunk full of my deceased father’s clothes, crying and hollering for David asking if he was alright and he also in the dark crying and hollering for me like prisoners trying to communicate with each other though their cells were far apart…I couldn’t even sit up. The closet was full of clothes so I would sit on that trunk huddled up…”mom” had left us again alone in the house to “teach” us a lesson. You think that kind of treatment would be a little hard if forced onto teenage boys or prisoners of war but David and I where little kids. We were barely in Grade school. It always seemed like she was gone for hours each time she left. All we would hear between our wailing would be silence… an empty house, two little boys alone locked in closets begging to be released…

I remember one of my first memories was being told she (mom) was giving my little brother away. A couple showed up. We were in the kitchen. They picked him up and I watched as they took him outside and loaded him into a white four door car. I then sat in a metal high chair and cried not knowing why my little brother was given away but he was gone…she thought it was “cute” that I cried. .”I gave your little brother away” she would say… I didn’t cry … I wailed from my entire being. The couple only took him riding and eventually brought him back. But to this little boy I had thought he was given away because she said she given him away. Growing up, it was a lot of cold mind games played out on us little kids. Everything was our fault. But on the outside it looked like a perfect little world.

When we got older she started locking us in the bathroom. It had an outside lock on the door. I used to try and climb out through the transom at the top of the door. One foot on the tub, one foot on the door knob and I could pull myself up. When I was able to do that, it turned into “get in the car!!” and David I would load up in the back seat. It was usually at night and she would drive to my real Mother’s trailer in behind Green Gables restaurant. She would park out in front of her trailer and tell us to “get out of the car”…”Let her raise you”…”you want that??”  …”DO YOU WANT THAT???!!!!!!” she would scream…of course we would be crying and we would beg her to stop and after awhile she would start the car and we would go home with us promising to not do “it” again whatever “it” was….

I don’t know why we were faced to suffer through those rants of hers over and over as little boys. 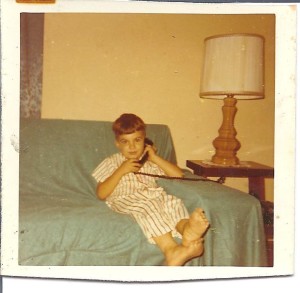 The photographs we have of us as little boys mostly were staged. Sit this way. Smile. Hold the phone and act like you’re talking on it. Me knowing I wasn’t allowed to even talk on the phone … We weren’t allowed to cross the street until we were about 14 years old. Everything was controlled. I don’t know why she thought it was “ok” to do what she did. It was nothing short of child abuse… I guess today as my brother sits alone in jail and his son is dead and his step mom did what she did, it reminds me of mom. My mom tried to erase all of my birth Mother’s family except for the ones that meant something to her or she could get something out of it. They basically never existed in her eyes. She thought she was a “savior” in her own eyes. Did she do some good in the course of time? Of course she did. So it’s the same shit, different generation. I would also bet if David and I had any other name than “Gee”, like if we had our Mother’s name instead, she would have taken that away from us too. The case in point, my nephew. His family didn’t sign him away but we all were erased and kept back until he, like my brother and I had to do. Come of age and figure out what the hell was the truth and what wasn’t the truth. In December before he was shipped out. He spent four days with his Father. My brother, not the best father in the world but his father just the same. They made amends. Lil David finally knew the real truth. There was the truth, warts and all and hugs and forgiveness… Thank God for that. 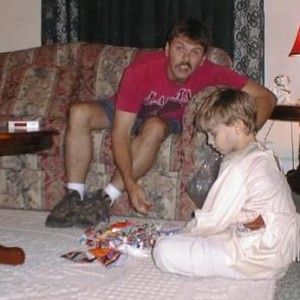 of the deception…Am I shocked? Of course not. I have been through this before. Like I said earlier. It was just a couple of generations earlier that my brother and I had experienced the same crap. So I felt his pain, I feel our pain…all the years of me suppressing what we went through is no longer buried… I can’t forget the things my brother has done as an adult…But the little boy inside of him and me need each other.