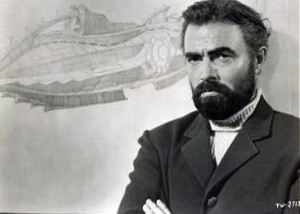 I have enjoyed watching old movies like “20,000 leagues under the Sea” since as long as I can remember. I can probably recite the whole movie too. In fact, my son I used to watch it on a VHS tape and rewind it (remember rewinding?) and watch it again. The version I like was filmed by Disney in 1954. It falls in line with “War of the Worlds” and “When World’s Collide”. Just good old fashion sci-fi movies.

So on to my point. I was watching “20,000 Leagues under the Sea” again and I noticed something this time on my big screen tv that I hadn’t seen before. When the Nautilus reaches the sub base  at Vulcania and surfaces, I could see more detail of Nemo’s hideout. Mind you that the story line takes place around 1868 so bare with me…

I realize Nemo was way ahead of his time. He invented nuclear fusion and it powered his sub. He also invented underwater scuba gear among other things. Once again he was visionary. But check out this still photo grab I found on the net of his hideout. It was taken from the 1954 movie.  Do you see what I see? For 1868 he was really advanced! Agree?