Thumbs up and safe passage…I used to watch Siskel and Ebert as a kid. 🙁 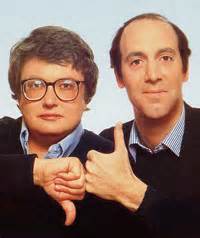 CHICAGO (AP) — The Chicago Sun-Times is reporting that its film critic Roger Ebert has died. He was 70.

The paper says on its website the Pulitzer Prize-winning film critic died Thursday.

Ebert was known for his thumbs-up, thumbs-down TV reviews that influenced moviegoers across the nation.

On Wednesday, he had announced on his blog that he was undergoing radiation treatment after a recurrence of cancer.

Ebert was diagnosed with thyroid cancer in 2002 and later had surgery for cancer of the salivary gland. He lost his chin and his ability to speak. But he later resumed writing full-time and eventually even returned to television.

Ebert started as a film critic for the Chicago Sun-Times in 1967. In 1975 he became the first movie reviewer to get the Pulitzer Prize for criticism.