The Changing of the Guard…

It’s tough. It happens. I have a hard time seeing it both ways and quite frankly, can’t even stop it..

The changing of the guard. The student becomes the teacher.…It’s an old phrase that’s been around forever. But what does it mean? Well, to me it means things are constantly and slowly ever changing. One day you are a kid and the next you are raising kids. And then the next day your kids are raising kids so you continue to move down the line of life so to speak. Your parents once were the “guard” and responsible for your well being and safety. They nurtured you. Hopefully they held you, read to you and spent as much time as they could building memories with you.  My Mom said to me when I was older and it’s probably the most profound statement she ever said. She said “I held onto you as long as I could but it was as if you were just whisked from my hands”.

It’s a powerful statement that speaks volumes. I would only realize that years later with our own children. My wife and I did everything with our kids. We were never apart for more than a day or so. Whatever she and I were doing we took them too. Whether it was vacations, camping or just shopping, we piled them up in the car and they went too. I even played music on the road during the weekends and I took our son with me. The girls never wanted to go so they stayed home with their mom. But we read to them. We held them. We spent as much time as we could with them building memories. My boss at the time also had a profound statement he shared with me. He and his wife raised two kids. He said that it seemed like forever his house was always bustling with kids and their friends. His said the phones were always ringing off the hook and then one day it was…silence. He said he goes home to an empty house and silence now and he missed the “noise”. He too said “cherish the moments” with your children. It’s over too fast and too soon.

The changing of the guard marches on.  Our kids grew up and they all now have kids of their own. Our house that was once bustling with kids and phones ringing off the hook has also gone ……silent. Too fast and too soon. The Guard has been moved to their homes. It’s their time. It’s their time as parents to read to them. To hold them. To nurture them. To build memories of their own in which one day, too soon for them also, they will experience the changing of the guard. 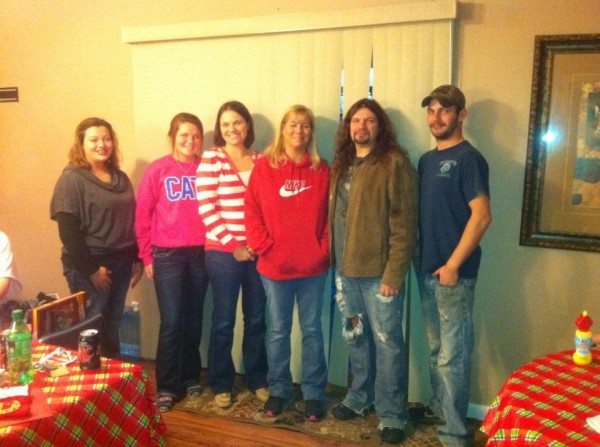 They were just babies not too long ago…

Every year we take a family vacation.  All of us pile up in a few cars and go to Florida. Our kids go, their spouses go too. So we have a big family get together in Florida. One thing my son and I do is take a deep sea fishing trip. It consists of a four hour trip out on a big fishing boat with a bunch of other people that like to fish. It’s mainly a time for us to hang and get away from the women folk. Nothing against my wife or daughters’. It’s just “guy time”. The boat leaves the harbor and heads out to sea for about an hour before it drops anchor and we all fish.

While on the last fishing trip we took, it was my son n law Zack, my son Josh and me that all went. We settled on a place on the side of boat and grab our spots.  Zack is located to the right of me and Josh is located to my left. After me having a few beers and hamburger cooked on the boat grill by one of the shipmates, the boat is still and the horn sounds. It’s time to fish. As it would be, the Captain and first mate wound up on our side of the boat and were fishing over the railing to the left of my son. 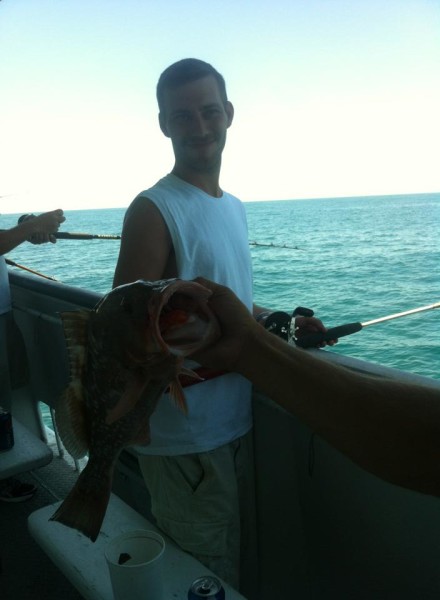 Josh and the fish I couldn’t reel in…

It was a nice day out of the ocean with the sun and wind in our hair. We carried on with the Captain and first mate a bit while we all fished. The Captain and first mate had a little bet going on between the two of them about which one would catch the biggest fish. Several people around the boat including us were landing some fish. Nothing to write home about but it was a nice day to be out and enjoy. And then… The changing of the guard. My fishing pole took a hard hit and went straight toward the water. I held on to it and was trying to reel the fish in. I couldn’t turn the crank. I am left handed and the crank is right handed but still regardless I couldn’t turn it. By then the Captain and first mate first had turned their attention to my catch. The first mate said “Oh, now that’s a big fish!”  So here I stand, fishing pole facing straight down over the railing of the boat. I am trying desperately to save face and crank this damn fish up. Still no success. I couldn’t turn it. My son sees my struggle.  So he reaches over with his right hand and grabs the pole and lifts it up. Almost straight up in the air and then brings it down some so I can crank the fish in some. He has his pole in  his left hand and he is still fishing the whole time he is reaching over grabbing the pole I am holding and bringing it back up into the air, lets it go slack so I can reel the fish in. We do this over and over and finally the fish breaks the surface. So here I am holding the fishing pole with both hands trying to crank the fish up higher to get it into the boat and I still can’t reel it in! Even after his help the fish is now between the railing of the boat and the surface of the water and it’s just dangling in the air! I can’t do anything but hold the pole! So Josh reaches over the railing and grabs the fishing line and pulls the fish over the railing for me.  I was both happy and embarrassed since my pride as being “the man” was diminished some. I helped him catch fish when he was a kid. I helped bait his and his sisters’ hooks. I took the fish off the lines for them. I helped them when they couldn’t get them in. And now…The changing of the guard. He helped me. I couldn’t do it. So he took over. He wasn’t trying to embarrass me he was just doing what has to come naturally. The changing of the guard.

We all are doing it. My grandparents raised me. I now take care of my grandpa. The guard has changed for him. He once took me fishing. I have taken him fishing. He used to take my brother and me out for a burger. I now take him out for a burger. Our kids are slowly experiencing the “changing of the guard” with my wife and I. We aren’t getting any younger. That’s an old cliche I know but its happening right before our eyes. I don’t want it to happen. But it’s a natural precession…

To see how slowly and ever steady it marches on, look at a photo album. A precious book of memories. Some of the babies are full grown and have kids of their own. Some of the older folk are gone on to their reward and no longer are with us.

It’s the changing of the guard…