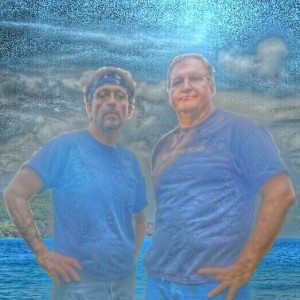 The Brothers Rigney is a rock duo based out of Austin, TX. The founding members, Paul and Bryan, are brothers and form the core of this eclectic, melodic rock project. Come visit us at www.thebrothersrigney.com or www.facebook/thebrothersrigney to read the full story, see pictures and listen to our music.

Our musical heros include anybody who has ever picked up an instrument and made a living. Guitar influences such as Jimi Hendrix and Jimmy Page and Bass influences ranging from Jaco Pastorius to Flea. All of these people studied and mastered their craft and were able to share it with the rest of us.

Hang in there. It’s a marathon, not a race. Don’t get greedy and chase money. Do it because you love it or don’t do it at all.

We were doing a gig early on and the drummer who was sitting had a monster case of stage jitters. We started the set and noticed that we were going way too fast. We tried to signal him to slow down but he just kept going faster. Between songs we tried talking to him but it only got worse. By the time the set was over, we had played an hour’s worth of music in 40 minutes. We called it our Alvin and the Chipmunks night.

The worst gig ever was an outdoor gig we did one October in Texas. Fall is generally mild in Texas and a great time of year to be outside. It figures that a cold front would blow in and drop the temp 20 degrees during the gig. Our hands nearly froze to the frets.

We are great fans of boobs, but aren’t sure we can consider that a hobby. Does playing a different instrument count?

It’s growing like wildfire. There’s far more opportunity than just a few years ago. Thanks to social media and the proliferation of quality tools to create and record, anybody with skill can now get involved in music.

Paul is a certified mechanical watchmaker. It’s pretty uncommon and he’s great at fixing our stuff.

Bryan really loves his cat. He spoils her and calls her his Princess.

Paul says he into Mary Ann because a good farm raised gal will take care of you on a cold night.

Bryan says that all three are too tall, but in a pinch he’d go with Ginger because she’d laugh at his jokes.

Our last question  called “Shout It Out Loud”. It’s were you get to talk about whatever you want to talk about. So go ahead and “SHOUT IT OUT LOUD”!

Just buy the album. The more you buy, the more we play, write and play some more. With a little luck, we’ll be able to do our writing in the islands. So please, buy the album.