artists on the scene. The following is a written interview we conducted with the

artist while they were working on their next CD and Tour!

Welcome to Kick Acts. Tell us a little about yourself and your band and were you

can be found at on the web.

I have been on the stage since  forever. When I was old enough to walk, I would follow my older sister up onto stage while she performed a solo in church and when I felt like it I would sing a note, when I didn’t, I’d just stand there with my thumb in my mouth…I just wanted to be ON the stage. I’ve attended Berklee College of Music for Stage Performance and been to AMTC three times. When I was in school I was in every singing group they had (girls ensemble, chorale, chorus) and I played violin for 4 years (when my parents moved us from MA to NC the

school we attended didn’t have an orchestra, so I stopped playing). I bought my first guitar (a black thin-body Martin acoustic/electric) right after I turned 18 and started taking private lessons at Raleigh Music Academy. Since then, I have

opened up for a few fashion shows and have been playing shows at live music venues in Virginia and various cities in North Carolina. My first album just released on

Paramore – Hayley WIlliams has an amazing voice and their lyrics are incredible.\

Lacey Sturm – she was the lead singer for Flyleaf (she has since stepped down). i

wish i knew how to scream and sing like that, you know, and still have it sound

good..Christina Aguilera – her voice is unreal. that power, the unending range, and just

Do you have any advice for someone just getting started in playing music? Any

pitfalls they should avoid?

stay positive – pitfalls to avoid: all negativity. the more work you put in,

the better your results.

i played a show in Chapel Hill, NC that was flawless performance-wise. the

energy was really there that night and the crowd was a lot of fun. also, i got

years back, and was given the wrong time for my set – they changed it when i got to

the venue, so i went from being 3rd or 4th on the lineup to 1st. i went on and only

much later. when the set time i was originally given came around, i did a little

show for people in the parking lot. that’s one of my favorite nights. the fans

On the same token as the above question. How about a worse gig story.

forgot the words to the verse i was singing, so i moved on to a different one that

“I Just Wanna Run” because that’s what I really wanted to do at that time, haha – 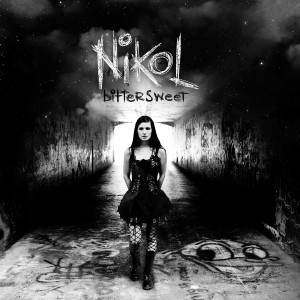 Do you have any other hobbies other than playing music? Collect stamps? Collect

hats from off the side of the road? Draw pictures of boobs?

every time i go to a show, i get a tshirt. so i have a collection of band

tshirts. my aunt makes beautiful quilts and she helped me cut and design a concert

tee blanket and i love it. it might be time for tshirt blanket part 2

i just kind of hate that schools are cutting music education.

Tell us something about each of your band members that we wouldn’t expect to hear… Like their hobbies or something like that.

Chris, drums, teaches at the Living Arts School in NC and is a black belt in

Tae Kwon Do. Damien started playing guitar when he was 14 years old and has spent a

lot of time doing volunteer environmental work. Justin has played guitar for over 15

years and likes to kayak. Anthony started playing bass when he 14 and is an avid

9. Hypothetical situation. You’re stranded on Gilligan’s island and you getto hook up with only one of the girls… Is it Ginger, Mary Ann or Mrs. Howell, and why?

i would love a vacation on the island!!

Our last question is called  “Shout It Out Loud”. It’s were you get to talk about whatever you want to talk about. So go ahead and ’93SHOUT IT OUT LOUD’!

keep up with what’s new on www.nikolmusik.com and check out my CD on iTunes:

on next year and i would really appreciate the support: