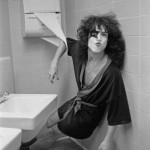 “The tour was horrible. Constant drudgery and misery. We spent all of our energy trying to coax Peter and Ace out of their hotel rooms. Ace sucker-punched Tommy at one of the shows. Peter had his usual handbook detailing how hotel staff had to treat him and which windows had to be covered with tinfoil and all that. There was no reasoning with either of them. We never knew if we’d make it to a show on time, and once we got onstage we never knew whether we’d get through the show. I mean, if a guy has trouble putting on his makeup, how is he going to play? Not surprisingly, the shows could be pretty awful.

I was angry at Peter and Ace for being disrespectful toward everything we had accomplished and everything the fans were giving us. I bought into the idea that this really was it. The end of Kiss. There was no place to go. it was unbearable.

We were stuck in a rut musically as well – basically playing the same 17 songs we’d taught them for the initial reunion. This was the third tour with the same set list. Peter and Ace just couldn’t master any more. The needle was already into the red. I had to come up with nonsensical interview responses to questions about why we were playing the same songs. I couldn’t just say, “because Peter and Ace can’t learn any others.”