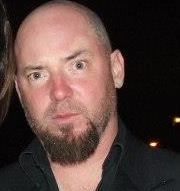 Guns and Hoses last night in Evansville was terrible and I’ll never attend this event again. My kids and I sat next to a group of police officers that I suspect were from Boonville Police Department because of their enthusiastic and highly inebriated support for Jordan Saltzman. Not only were these guys drunken idiots, but one of them even had the nerve to ask my 14-year-old daughter “what the fuck she was looking at” when she looked over at him during his booze fueled tirade. Of course, she didn’t tell me this until later or else I would have likely gone to jail for beating this bastard in front of all his law enforcement bros. Also, one of the officers used a stripped down pair of binoculars to sneak in hard liquor to Ford Center… one side was filled with booze and the other with a chaser. I watched several of them take a swig from this contraption. It was one thing after another from these supposed officers of the law. And while it was clear that these imbeciles were cops because they couldn’t seem to stop bragging about strong-arming the average citizen, what they didn’t realize is that I am a nationally recognized journalist with the power to stir a heaping pot of shit. So, if anyone has any information about the pigs that were sitting in Section O & P, Seats 9-12, I would like to hear from you. SHARE THIS STATUS!