(please feel free to re post/Like and share! Thanks 🙂 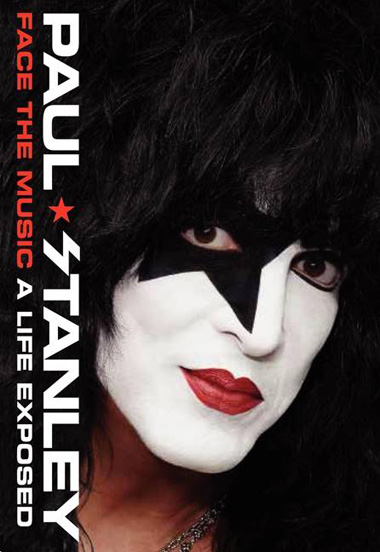 I just finished reading Paul Stanley’s book “Face the Music- A life Exposed”. At first, from the excerpts’ that were released to the news media prior to the book’s release date, I felt like maybe Paul was making everyone else “face the music” instead of him. I even commented on the fact that it seemed hateful and finger pointing. But what I found out after reading it was…

He is really no different than you or me. Most people aren’t born into the perfect status quo family homes with Ward and June Cleaver as parents. (That’s if they are your “example” of a perfect family.) He was born into the, dare I say typical? Dysfunctional family fold like a lot of us can relate to… Not much love going around, shown or even expressed. He to mentions that he was born was a birth defect that consisted of him not having a right ear. He referred to it as a “nub”. He also is deaf on his right side so he didn’t hear in stereo.

So feeling like the whole world was against him and virtually no family support or encouragement, he turned to music. Sounds all too familiar doesn’t it? It does to me.  As I read on thru the pages I felt like Paul was telling my story too. Not the riches and fame part but the lonely outsider, the outcast part. I never felt like I “fit” in anywhere either. As a matter of fact, though Paul has since made peace with his insecurities and inner demons (and Gene Simmon) I still have a hard time “fitting in”.

Maybe that is why I turned to music too. It was really a comfort to me. At night I would lay in bed and listen to the sound of the crackling tube warm up in the radio. The orange glow from the tube would light the darkness just enough and the smell of it as it heated up would permeate the air. Then the magic would appear. That wonderful sound of the late night DJ’s and the songs they played. Night after night throughout my childhood my old friend was there faithfully. Always waiting there for me. No matter how screwed up the day may have been. Whether I got yelled at, locked in a closet, or just spent time riding my bike,  when I turned that old radio on it washed away my fears and insecurities.

So Paul speaks throughout his book of his insecurities too. He doesn’t really throw anyone under the bus as a couple of other KISS members did in their books. I am sure he could have easily spilled a lot more about their insecurities and belittle them way more than he did. But he didn’t. He spoke of their addictions and their accomplishments. KISS was one big dysfunctional family too.

It is amazing to think that through he was “driven”. He really didn’t have a game plan. He just had the desire and he didn’t back down. Some of the things that happened to make KISS what they are, was timing and not really dumb luck but luck. It’s covered in his book. From Paul pumping gas, driving a cab and meeting Gene Klein for the first time and not liking him. From trying on make up for the first time to being in a successful band and trying to go through all the Playboy centerfolds he could. Now that’s rock and roll and yes it’s in there. But the book is more than that. He opens up his life, warts and all and shares his story.

Enclosing. I felt that out of the four original KISS members, Paul’s book is the best. It doesn’t have the dirt as the others do but I felt more like Paul was talking to me. As I said before… He is telling my story.

He is encouraging the lonely, the outcast. He is saying there is Hope. He is saying you can be who you want to be. It takes hard work but you can get there. You can rise above the past and make peace with it.

King of the Night Time World,

Paul’s book can be found at: