So I went to a Barber shop over the weekend. It has been a long time since I have been in one. I have to admit that over the years periodically I have been to a few hair salons and such but not a “Man’s” barbershop. Here’s the story.

[hmtad name=”Adsense Unit 1″ align=”floatleft”]I remember very vividly as a young boy my Grandpa (Buzz) taking my brother and me to the Barber shop to get our hair cut. It was at Buster’s barber shop on Second Street. We would go in, Pops, David, and me, grabs some chairs that lined the long front glass windows facing the busy street and wait patiently for our turn. I was always the curious one. So while waiting my turn I would look at the hunting magazines or newspapers of the day. Buster’s also carried among many things a line of Zippo lighters hanging on the wall and I would look them over trying to figure out how they got those fancy feathered fishing hooks inside of those lighters. There was also a drink machine. The old school kind where you raised the lid and slide the cold coca cola bottle over to a slot to retrieve it. Seems like it was a dime for a small bottle… When the barber chair was empty and my name was called my Grandpa would help me climb up into it and sit on the booster seat. I was pretty small back then and still in grade school so I needed the extra lift in order for the Barber to cut my hair. The Barber would then drape the cape around me, tie it down and get to work. Back then I didn’t have a say so on what style I could get so it was the standard cut for the time. I think it was called a burr haircut…

The barber would start out with his scissors and clip away. He, and my Grandpa along with the other patrons would carry on with stories and small talk as he went about his art of turning this shaggy headed little kid into a proper looking boy of the day. I can remember even protesting back then at an early age that I didn’t want it that short!… And I can to this day feel those trimmers going over my ears. I knew when he got to that point it was almost over. Trim around my big ears, then the back of my neck, a few whisks of his hand brush around my head and shoulders and then off came the cape. I would slide down off the booster seat, plant my feet on the big metal foot rest. Reach out for Buzz’s hand and jump off. “NEXT”! The Barber would say and the next victim would jump up in the chair. I seem to remember that I never wanted to be first so after my turn at the chair, we were out of there…

Fast forward a few years. Junior High. By then feathered haircuts where in style for young guys like me so we started going to Hair salons. Arnold’s barber shop in particular. A barber shop yes, but in the true sense of the word, it was more of a hair salon. I wasn’t getting my hair cut I was getting it styled. He had a woman in his shop that also cut hair. Nothing wrong with that but it was different than a “Man’s” barber shop. I suppose it’s similar to a Lady’s salon. Where strictly women go to have their hair done. It’s “their” time away from the opposite sex.

High School came and went. The 80’s were here and it was the hair generation. Not the hippie generation of the 70’s but the big hair of the 80’s generation. Rock music, Rock concerts and Aqua Net… And lots of it.

So except for the occasionally trim, barbershops and salons became foreign to me. I grew my hair out and really never looked back…

Sometime in the late 90’s the bald look came in for men. Well, I just couldn’t bring myself to follow that trend so while most guys were gladly trading in their long locks for a Mr. Clean look, I didn’t. I stood my ground. I also didn’t wear flannel. Once again, bucking the entire system as an outsider. The bald head looked great on my friends…but it wasn’t for me.

The Millennium rolled around and the ball dropped but not on me. Still no change for me. Hair today, hair tomorrow.

I guess that deep down inside me it has something to do with giving up or growing up. I hate to give it. Remember what Commander Taggert said in “Galaxy Quest”? “NEVER GIVE UP, NEVER SURRENDER!” In reality, it’s just hair. But it’s mine. It’s me. It’s about me…

I have managed to escape the job market with it because I do wear it up in a hat at work and have pretty much since I have had this job.

Okay, oaky. You’re wondering about this past weekend. So here we go.

Saturday I parked my truck and stepped into the Barber shop. It looked familiar like the ones of old I have been to as a kid. The ground didn’t feel “funny” like it did to the mariner on “Water World”, it felt comfortable. I looked around and sized up the place. Black and white checkered floor. Muscle car garage theme on the walls. Ok, two barbers’ chairs. One chair was empty and only one barber on duty. His chair had a guy in it and the Barber was busy clipping away. “Hi”, I said. “You got time for one more?” To which he politely replied “yea, just grab a chair”. So I grabbed the first chair and sat down by the door.

As I looked around I did take notice that there wasn’t a drink machine in the corner. Nor were there Zippo lighters for sale on the wall either. Neither were there stacks of old magazines or newspapers. So what was there you ask? So much more than that.

It’s hard to explain but will I try. Something that as a young boy I somehow maybe not had recognized but was made fully aware of it now as an adult. The importunacy of a barber shop. Or for the ladies I suppose a hair salon. A soon as I sat down a couple more guys came in after me and grabbed a seat to wait their turn in the chair. The gentleman getting his hair cut in the chair continued talking but not just to the Barber but also now to me… And to the other guys in there. This went on for several minutes…

And then it happened. Just like when the Grinch’s heart melted and he saw the true meaning of Christmas for the first time, the light bulb went off in my head.

The Barber shop is an institution. A tradition. A time honored place were men can meet and talk about the events of the day. It’s a neutral place. No enemies,’ just friends that you may not even know their names. Shortly after I sat down as the one guy in the chair was talking, I noticed before long we all were talking like we had known each other for years. He had worked at Delkers. My Grandparents had also worked at Delkers. Delkers had closed around 1973. So look at all those years that have passed and here we were on a Saturday morning 41 years later talking about the freight elevators in that old building that had long since been torn down. So much in common. So much more than a haircut but it’s the thing that brought us together. The Barber knew my old “stylist” Arnold. He also knew Buster’s barber shop. He spoke kindly of the old timers that used to cut hair too.

We all sat there as the barber was finishing up with is customer. He had out the trimmers going ove the back of the gentleman’s neck and over his ears. Next up was the whisk brush. He gently whisked away the clippings… Then off came the cape. The guy stood up. Checked himself out in the mirror and told the Barber thank you and handed over his money for a job well done. The Barber then spun the chair around toward my general direction and said

I stood up and just

like he did for me so many years ago…I helped my 93 year old Grandpa up into the chair. He had been worried about getting his hair cut for weeks and I had the time and the honor of taking him last Saturday for the first time since I was the kid. I helped him climbed up in that chair and the Barber put the cape around him and off he went to do his trade. Just a few minutes before that Buzz had sat there with the other younger guys in that shop as they listened to him tell them about the time his Dad had driven him along with his whole family to Florida in a Model T Ford. Buzz was around 5 years old at the time so that’s about 1925 or 1926. The old model T couldn’t drive over Monte Eagle so his Dad backed it over that big mountain…Just one of the many stories passed around the barber shop that day. After his haircut was over, I helped him out of the chair as he reached for my hand like I did for his so many years ago. Buzz thanked him and paid the man. I helped him out to the truck and a long the way he told me to be sure and thank my wife for letting me take him to get his hair cut. I didn’t need her permission. She knows its important for Buzz but I thought it was a nice gesture to her anyway. He also bragged about her homemade meatloaf on the way home. He was like a little kid on the way home. He kept rubbing his new haircut and was proud of it.

As for me getting a haircut. Nope. 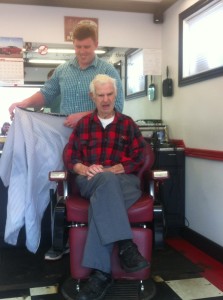 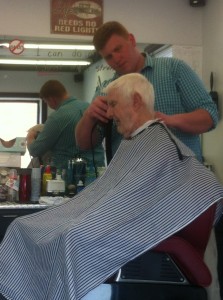 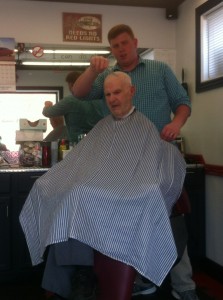