[hmtad name=”Adsense Unit 1″ align=”center”]Here we go folks… A beheading in America and it’s a woman by the way… A religious muslim nutjob got fired and stabbed and cut this poor lady’s head off… He had recently tired converting his fellow employees to the muslim religion…I can’t believe the guy that was a Deputy reserve spared him his life and only wounded him. He should have sent his ass on to the great divide.

Keep count. This isn’t the last one. The ice has been broken…It has begun.

DIP ALL YOUR BULLETS IN PIGS BLOOD… 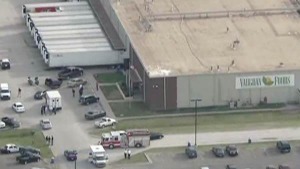 Gruesome new details have been revealed regarding a woman murdered in Moore, Oklahoma, Thursday. According to local outlets, she was beheaded by a man who was reportedly in the process of converting to Islam.

The victim, identified as Colleen Hufford, 54, died at the scene at Vaughan Foods, a food distribution company, after the violent attack unfolded around 4:05 p.m. at the hands of a male former employee.

Alton Alexander Nolen, who was fired from the business before allegedly attacking Hufford and another coworker, is the primary suspect in the case. He was shot during the attack by an off-duty officer and remans hospitalized, but is expected to survive.

Coworkers claim that Nolen had recently converted to Islam and that he had been attempting to convert them as well, according to police