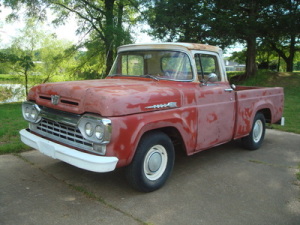 It looked like this one but was solid red!

Around 1970 my grand pa purchased a 1958 Ford truck for $100.00. It was red and the gear shift, also called “3 in a tree,’ was on the steering wheel column. He didn’t know how to drive one so my grandmother drove it home. He eventually learned to drive that old truck. He even let my brother and I brush paint one year. I remember that old truck well. It served Pop’s well too. He drove it back and forth to work all those years until he retired in 1985. He then sold that truck for $100.00. I would say he got his money out of it. He and that old truck used to take my brother and me fishing too. It wasn’t anything for him to load us up and take us to Audubon Park to fish with cane poles. He never got to fish much because he was always busy baiting our hooks or fixing our poles. I am sure us two boys were a handful for him. I can still see him stringing up the bluegills we would catch. We would take them home, he would clean them and mom would fry them for us. She would have us drink milk when we ate them incase we missed a fishbone.

Well, here I am a grown and I have been asking Pop’s to go fishing for years. He always declined but I asked every year. Well last summer I brought it up again and this time he didn’t say no. He said he would like to go. I prayed for a nice cool day and called him and told him I had the poles and the bait already to go. He wasn’t going to wiggle like a night crawler out of it this time. I picked him up and took him to my daughter’s in laws’ pond. I set him up a chair and fixed him a pole. I baited it just like he tried to teach me years ago as a kid and asked him if he wanted me to “cast it” it out for him. He said “nope, I can do it” and with that he tossed it out there and sat down. It wasn’t too long before the fish were biting. He jumped up and started reeling them in… One after the other… I was so busy taking fish off his pole and rebaiting it I didn’t have time to fish myself but I saw what he saw so long ago when the roles were reversed. I was having the time of my life watching my Grand pa have the time of his life.

We fished for a few hours and then I took him home. He kept saying over and over how many fish he had caught!

This past weekend while we were doing our weekend thing of me taking him to the store and out to eat he brought it up again. “We going fishing this year?” he asked. Yep Pop, you bet ya” I said… Come on Spring….

(looking back over this article.) It’s hard to believe it’s been five years since we did this…Pops is now 93. His health is a little worse for wear but at 93, how much tread would I still have left on the tire? I am almost embarrassed I haven’t made time to take him back to the fishing hole. I have asked him several times in passing but just like before, he keeps telling me no. But I really think I should just take him any way.