So when this guy popped out on the scene in the early 90’s he was one scary guy. Then he went thru an identity problem and maybe couldn’t make up his mind if he was going to be scary or Bowie? I think he lost a lot of his fan base when he abandoned the Goth look for androgynous look and changed his music up. Of course it’s the revolving door of an artist.

Marilyn is back with his new Album set to drop in 2015 but he has released the single “Third Day Of A Seven Day Binge”. So what do you think of it? I personally like the scary Marilyn but he is still working!

When the song starts up I keep hearing “what’s your name? Who’s your daddy? Is he rich, is he rich like me? 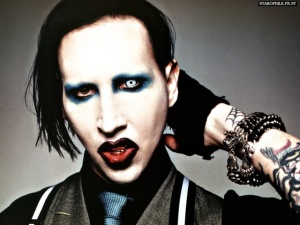