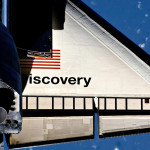 Someone I know had a relative that worked at NASA and shot this video from the shuttle hanger back in 2006. Pretty awesome! Turn up the speakers and listen to those engines come to life and ROAR!

On a sad note, I really think NASA has lost its vision. It’s probably full of scientists but no one with a real vision. We need moon colonies… Space Stations in orbit around the Moon. We need explorers to reach out further than we ever have before. Were are the Magellan’s? The Columbus’s?