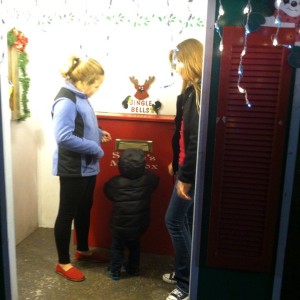 This past Christmas Eve I went downtown to the Christmas in the Park display as we do every year. We have been going there since our kids where little and now they in turn, take their kids and drop off letters to Santa at the North Pole mailbox as they did when they were kids. So it’s been our family tradition that’s a good 20 years old or so…

I remember when our kids were young how the displays were new and lit up. The wooden handmade tractor and the little rocking pigs and such. The giant Castle that used to be there. The three wise men stood watch there too. The Gazebo was always decorated and lit up too. Christmas music was piped in  from speakers located at different points of the displays. The large tall trees were also lit up. A festive time of year and an enjoyment for all. Santa was indeed coming!

This year, as I have noticed for the past couple of years the displays have fallen on hard times. Whether due to neglect, vandalizing or both. I can see the care and attention to detail on all the displays when they were made. The Train still holds up but the big tractor had a wheel broken off it and it was propped up against the display. One of the little wooden pigs had a steering wheel that was left lying to the side. The large trees that are usually lit with all colors of lights were dark. I looked the trees over and the lights where there but not turned on. The little room with the Christmas tree and fireplace display, only half the lights were working on that display. The music was gone. I looked it over, hoping to find out and fix why only part of the lights were on as as my grandkids’ admired it.

Again, it was Christmas Eve. It should have all been on.

This isn’t a complaint. Just an observation. I know there was turn over several years ago between one group that  had taken care of it and it then became I guess the City’s responsibly? But, regardless of who is responsible for it, I wish it could be brought back to its full beautiful capacity. There is so much potential there. It’s a place where kids can come with their parents and see Christmas. Young couples can have their photos taken there. Older couples like me and my wife can walk through there and remember when our kids where young and running from display to display marveling at it all! It’s a place of magic. The new Red door church that is on display there is awesome! That’s what the whole display needs. New life. The hands that crafted those wonderful original displays took pride in it and they need to be repaired. Maybe a small sign dedicated to the original carpenter of each. New ones need to be built.

If there is a problem during the night with vandals, or people getting rowdy, maybe HPD can assign a “Toy Soldier” to stand watch over it. They could have a Toy Soldier room built for him or her so they could keep watch and keep warm.[hmtad name=”Adsense Unit 1″ align=”floatright”]

The “Christmas in the Park” is a wonderful Henderson tradition. I know my family has enjoyed it for a long time. I would like to see it continue and be “brand new” again. Bring back the magic. The Christmas Spirit. The youth in us all. I know I would be willing to help paint some of it if need be. Just holler.

What do you say Hendersonians?