A poor man has poor ways. Or better yet. Great ideas! DIY. Why pay outrageous prices for mixed drinks and expensive shots at your local favorite watering hole when you don’t have to? For example, a shot of jäger is about 6 bucks. A shot of Hot Damn ( my favorite btw when I do want the occasional shot which is rare, is about four bucks). A couple of those or even worse, you buy a round for your friends and the next thing you know, your wallet is empty and your doing the club’s dishes to take care of the debt. So, what do you do?

Here’s a neat little idea I came up with. I got in the habit there for awhile of buying those 1 dollar energy shots at the dollar store. Instead of throwing away the little plastic bottles I washed them and put them away until I had about 20 of them. I also kept the labels on them and didn’t remove them. One night I got to thinking about how they could be reused… I wondered how much they would hold. I took a standard shot glass and poured it into the bottle. It took three of them to fill it…The ez math is this. A normal shot is 1 oz. These little bottles will hold 3 ozs. So that means I can get 3 shots in each bottle. I went and bought a pint of hot damn for 8 bucks. I filled 6 little bottles up. That’s 3 shots in each bottle, or in money terms, 72 bucks in my pocket ( less the 8 bucks for the pint of Hot Damn) if I had bought 6 rounds three times at the bar…One night before we went out I stuck those bottles in my jacket and we met up with some friends at the bar. We ordered a few beers and before long someone wanted to order shots. I said hang on a sec…I took those bottles  out and passed them around…Of course, not everyone should do them all at once to attract attention but, they look just energy shots…No one suspected anything. We had the shots, saved a ton of money and took the empties back home to wash and reload later!

Those little energy shot bottles can be used for anything…Kids drinks, water, it doesn’t have to be Alcohol.What are some of your ideas?… 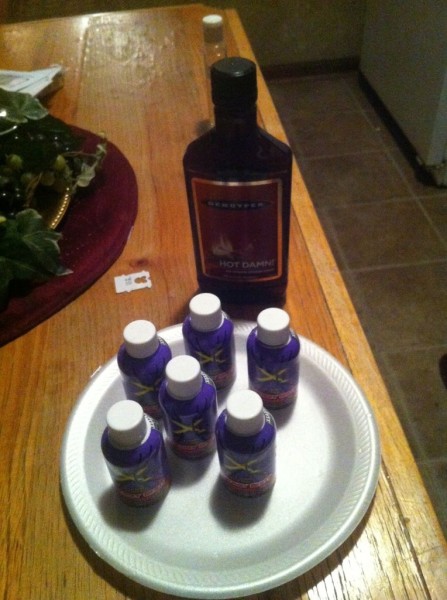