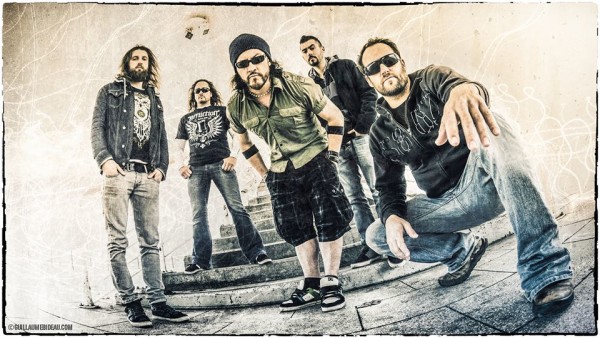 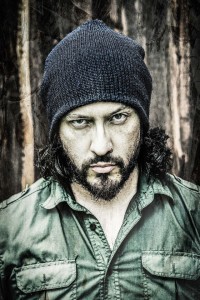 Hi. I’m Guillaume. The singer of this human association.

We’re French, great friends, we eat frogs and anything, we play some great music we do by the heart and I guess or hope our music is available everywhere..

If I have to speak for myself I will say:

Rage Against the machine

Why because they simply touched me as a human..

They changed me.. For the better or the worse. It’s not mine to choose.
Do you have any advice for someone just getting started in the music business?

Don’t do it unless you are very good. And not only good in front of your mirror in your messy bedroom.

Everybody can pretend. This business needs consistence.
What piece of advice did you ignore that you wish you hadn’t?

Nothing. I knew it all deep inside.

Worse: When the venue guy, as you are finishing the soundcheck as the doors are openinng, comes to you and says: Time is up. Curfew is strict and we only have time for the headliner.

Best: Play in a stadium with Metallica in front of 65000 people and my hotel room is in the stadium itself. Just have to walk from the bed to the stage in 5mn..

Do you have any other hobbies other than playing music? Collect stamps? Collect hats from off the side of the road? Draw pictures of peckers or boobs? Make sock puppets? Sit in the dark and eat Cheetos?
I have a hobby which is also a job: Photography. I need to make money with everything I do. Music made me poor, hahahah!!! I have to think practical.

What do you think about the current music scene or lack of? Care to address that?
I don’t listen to music much. Music is a selfish way to express myself and I like it this way.. Dealing with my mind takes too much time..
Do you think reality shows like American Idol, X factor and The Voice have helped or hurt the music industry as a whole?
Hurts. It’s the worse shit ever. A shitty perfectly created world by fake perfect humans. They blind and misinform people and create a fake world that sucks big time.

They deserve to rot in hell. But I don’t believe in god. God is the first reality show.
What is your opinion of unauthorized music downloads?
I hate it. They kill us. So are they killing culture. And culture is  everything. With food. Music and art are mind elevation.
Tell us something about each of your band members that we wouldn’t expect to hear.
David has a huge ribcage, Franck snores with really weird sounds, Perdi is beautiful but ugly, Clement is intelligent but stupid and I am the worst nightmare.. Stupider than the rest of us.

Hypothetical situation. You’re on Gilligan’s island and you get to hook up with only one of the survivors… Which one and why?
I don’t know this place.
Do you know what a vinyl album is and have your ever purchased one? If so, what was it?
I’m 36. I know what it is. I don’t remember what it was. I was too young. My first cd though was the first SEAL album. I still very much love it.
You’re marooned on an island with Justin Bieber. Do you choke him out the first night in his sleep or what?
No. This young dude is just victim of his success and his surrounding. And I’m not jealous. And as long as he likes what he does I won’t allow myself to judge him. I would try to get to know him to get to know what he’s made of. I’m sure he’s a nice guy after all.
What is your opinion of Miley Cyrus?

I don’t know that person.
Which would you rather hear in concert? Lip syncing or real vocals?
What do you think?? I’m not stupid..
Who, or what, is the next big thing?
Google managing to make my friends and I live until 300 years old in good health all the way.
One artist you can’t get enough of and can’t live without is…
Myself.
Confession time. Share a secret about yourself.
I hate silence. Silence is death and I can’t accept death. I get the point but I don’t accept it.

That’s why I drink.
Favorite movie of all time and why.
Maybe Minority report.. I don’t know why and I’m not even a fan of Tom Cruise. When you love it’s not always necessary to ask yourself why you love. That’s the magic of it.
Our last question is called “Shout It Out Loud”. It’s were you get to talk about whatever you want to talk about. So go ahead and “SHOUT IT OUT LOUD”!
Today 12 people died in France. They died because they had the freedom of speech and some people didn’t like it.

Freedom is our right.

Our soul needs it.

Unfortunately the majority of the world is deprived of it.

We, who have it, must cherish it until the end.

We are lucky to be alive.