But not in real life! The last show of the tour Alice Cooper has suggested that he will have 3 more guillotines made to cut of the heads of Motley Crue and stick them on posts…That would be an awesome show and if it happens, someone please video tape it!

In January 2014, when Alice Cooper agreed to open for Mötley Crüe on the latter’s farewell tour, he didn’t exactly know what he was getting himself into. Now, a year later, Cooper wants to kill every member of the Crüe.

Not literally, of course. For more than 40 years, Cooper has staged a theatrical rock ‘n’ roll horror show that has climaxed with his own simulated death. For Mötley Crüe’s final U.S. performance on December 31, 2015, in Los Angeles, Cooper would happily pass on his murderous tradition to his tour mates.

“That would be awesome!” enthuses Crüe drummer Tommy Lee during an interview with Yahoo Music at the Langham Place Hotel in Midtown Manhattan. “I asked him earlier, ‘Can you make three more of those guillotines. Then you could chop off all our heads at the same time!’”

Cooper says it would be easy to create a few more death machines by the end of the year, and feels that his Frankenstein monster would be the perfect beast to finish the job. “It would be great for him to come out and collect their heads and put them on posts,” he says from a hotel suite black leather chair positioned in a conference room next to Lee and Crüe guitarist Mick Mars.

Here's the entire article from YAHOO 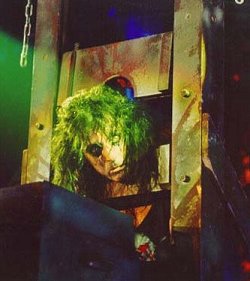