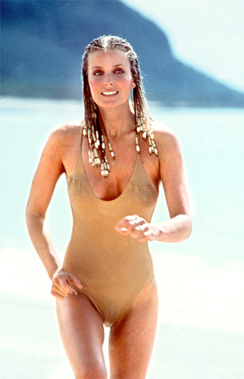 In 1979, this  poster was everywhere. At 25, Bo derek was the next Farrah Fawcett? Or so it seems. There was the iconic scene in the movie 10 that shows her running down the beach in slow motion. Some people thought the movie was the worst movie of 1979 but it did catapult her into the limelight. Married to John Derek, a guy that was 30 years her senior. He basically invented Bo Derek. In Hollywood, I guess anything is possible. They remained married for 22 years until his death in 1998. After the movie 10, Bo Derek appeared in two issues of Playboy magazine and made a few more movies and then disappeared from the scene. Now 35 years after “10”,  long gone are the corn rows she wore but at 58 years old Bo Derek  and still stunning and reflecting back on her life…[hmtad name=”Adsense Unit 1″ align=”floatright”]

For an interesting interview  with Bo Derek and aging, click <HERE>