Pink Floyd’s “The Wall”. Released in 1979 was an epic double album. I remember my friend from school Tony Cooper buying it on 8 track (it was two 8 tracks) and he let me borrow them for what seemed forever. I played them over and over in my room.  The songs, and the message of the separation, loneliness and of disconnect was a powerful statement. The perfect album for me to relate to and wrap my teenage head around. A few years later in 1982 “The Wall” the movie came out. Another masterpiece. I have seen it many times. The scene where Pink burst out his hotel window and looks at the traffic below and no one gives a damn is forever etched in my mind. 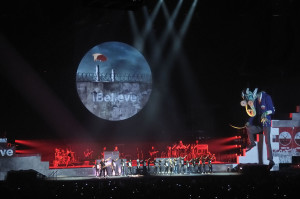 Most know the story of Pink Floyd. “The Wall” was based on Roger Water’s childhood of his Father going off to War and never returning and the consequences that follow. Plus the fact that while performing Roger’s felt the audience was disconnected from the band. When the tour came out the show was so huge that it only played four times. “The Wall” had to wait fortechnology to catch up with it.

Roger Water’s left Pink Floyd shortly after the album was released and took the “wall” with him. Fast forward and technology finally caught up. Roger began to perform “The Wall” in its entirety. He embarked on a two year tour and took “The Wall” all over the world. It has a profound impact on people. The message makes you think. It’s almost if not in a sense, a religious experience.

This year on September 29th, 2015. The Wall comes to the theater. If you haven’t seen The Wall. You need to. Here is the Official trailer. Don’t miss this one!

For more on it: The Rolling Stone