“The Leader of the band is tired, and his eyes are growing old…

But his blood flows thru my instrument, and his song is in my soul”. 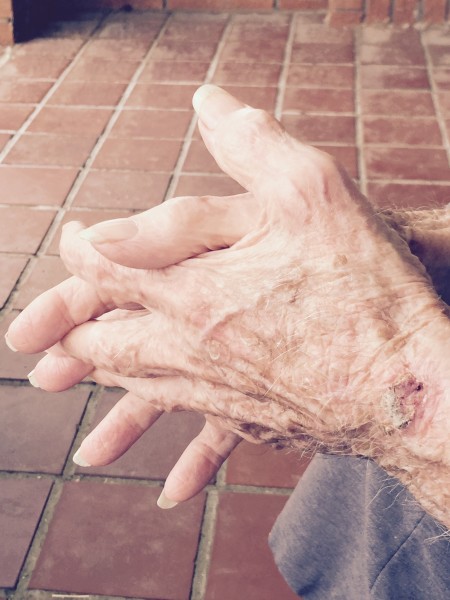 A well written song by the late Dan Folgelberg. It was his gift to his father. A song to this day that almost makes me tear up when I hear it. The depth of it. The meaning of it. The beauty of it. The song looks at life and if you have paid attention to it closely, the brevity of it. The shortness of it. Breathe in and breathe out and it’s…[hmtad name=”Adsense Unit 1″ align=”floatright”]

The other day I was sitting and talking with my Grandpa “Pops’ on his front porch. I try to go by there daily at lunch to spend a few minutes with him. He usually gives me the weather report of what he has seen on the Weather channel. If you have read any of my previous stories about him you will know that it’s about the only channel he really watches even though he has about 200 channels. Every once in a while he will be watching “Bonanza” and say, “I have already seen this one”. I will jokingly reply “Yea, because we watched all those shows as kids!”

“Pop’s” is thin. He is still fearlessly independent even though I tell him he needs assistance. His once muscular body has succumbed to the sands of time. He used to stand tall, shoulders back. He is now hunched over. His once huge biceps and forearms are now reduced to just skin and bones. His legs that I have been told used to tear up a dance floor now and then in his youth no longer can support him without his “Cadillac” as he calls it. Cadillac meaning a seated walker with wheels that he pushes around most of the time. His once chiseled facial features that he used to charm the ladies with is gone. Replaced with wrinkles and age spots. Despite him eating all the time he can’t put any weight on his tiny frame. He may weigh 100 lbs. soaking wet when he used to weigh over 200 lbs. His eye sight is not what it used to be. In fact, he is slowly going blind. He can no longer read the newspaper. Something that he has probably done every day since he learned to read. He now reaches out with his hands to me and holds them still as I place his favorite drink of choice “Sprite” into them. He can see but not long distances. He can’t make out the house across the street anymore. Or even short distances anymore for that matter. Such as the newspaper. It didn’t help that they had shrunk it in size too. At 94, he has a full head of snow white hair still and one could probably almost make a sure bet at the horse track that it won’t be falling out on him anytime soon.

On this particular day I got to looking at his hands and got to thinking to myself “If only those hands could speak”. But in a non-verbal way, they do. Those hands have held a life time of hard work. They carried his hopes and dreams. The sorrows and heart aches too. They carried the weight of a lifetime for him. They remain frail but steady. Those hands held the hammers and nails that he used to build beds at the Old Delker Brother’s factory. Those hands held ink pens and note book pads that he used to “count pipe” at Crestline Plastic Pipe Factory. I remember as a kid he would come home more than once with the front of his boots cut out because he had gotten his feet ran over with a heavy steel wheeled cart. I guess this was way before OSHA was a big deal. He never wore steal toed boots. His toe nails would be busted and bruised and he would have his toes wrapped in electrical tape but the next day he would get up and head off to work. It just wasn’t “him” to stay home from work. It never slowed him down. I can only recall him being really sick maybe once while we were growing up.

Those hands help build roads for the CCC’s. To this day he can recall what town he was in while building roads out west. He tells of watching wild horses run thru the desert and running a gas powered film projector at night. I am embarrassed to say that even though I have heard the story several times I can’t recall where it was at this moment.

He used to love working with wood. I remember Pops building David and me a toy box when we were just tiny little tots. It was so huge and had two sliding doors on it. The care that went into it. I watched him sand and finish the wood finish until it was perfect. He tapped the finishing nails until they disappeared. He was a craftsman at it. He took pride in it. He still takes pride in his self. I wish I still had that toy box and often wonder what became of it.

Those hands baited hooks and helped us throw out cane poles at first, and then later on, rod and reels. I couldn’t cast an open face reel to save my life. I would always wind up with a “birds nest”. He would gently untangle the mess I made and cast it for me and then hand the rod back to me. His hands held the fish that we were too scared to touch. They pitched the whiffle balls to us as we tried our luck at baseball. David and I were notorious for getting flat tires on our bikes. Pops would pull the inner tube out away from the rim, place a patch over the hole, add some glue to it and light it with a match to melt it in. He showed us how to make paper kites with newspaper and glue. He used take small pieces of white PVC pipe and widdle out a homemade reed (block) and make us flutes. It seems the employees at Crestline were quite inventive! I remember PVC lamps too that he had made.

He walked David and me to grade school. We used to walk down town after the businesses where closed and “window shopped”.

When we got those guitars for Christmas Pop’s knew a couple of chords and played a song for us! There was nothing those hands couldn’t do.

All along as he slowly aged, his hands did too. I never paid much attention to it. I just never saw it. But it has happened. Once again, if you have read any of my “Pop’s” stories, he sits alone a lot. Really for days on end. It’s not a dig at anyone that can’t go by and see him. Life is fast. We all have a million things to do. Lately I have changed my habits when I go see him. I put the phone down. I look him in the eyes when he talks to me. Sometimes (a lot of the time really) the things he talks about is stuff I am totally not interested in hearing about. Lol… I guess it’s an elderly person thing. But every word he tells me is important to him. Every sentence. Sometimes it’s about finances and saving money. Or what to do with the house once “he’s gone”. He brags on Denise’s cooking. But I always give him “time”. He gave me his “time”. It’s only fair I give him my “time”. I am trying to do that with my family too. My wife will be the first one to tell me I fall short on that and she is right. But I am trying.

Something else I started doing is this. Well let me back up. I was wondering when was the last time he had a hand shake or a pat on the back. You know, the “human touch”. It’s important to us all. He doesn’t have leprosy. Old age is not contagious. He is a human being. So, those hands of his that gave me comfort and assurance, I now assure him. I place my hand on his shoulder when I talk to him. I have straightened his hair up.  We all need the human touch. It’s what makes us human. It’s comforting. I notice my wife tells her mom that she loves her every time they see each other or speak on the phone. She also tells her sister and our kids too. I realize now that’s important to hear. I know they know it but they need to “hear it” too. It reminds me of a book I read. Chuck Swindoll tells of a story of a kid praying before bedtime and the kid was afraid of the dark. ‘Well, Jesus is with you” his father replied. The kid replied back that he wanted Jesus but with some skin and bones on him. Make sense? Not just words but actions.  So I tell Pop’s I love him before I leave. He knows it but needs to hear it. The other day on the porch when I took the photograph of his hands, I said “Pop’s I want you know, I am extremely grateful and David is too that you took time out of your life to raise us. I told him he might never had been rich but he made us rich by being a part of our lives….

It’s no secret that when I was younger we didn’t always agree. In fact, we hardly ever agreed. Maybe we agreed to “disagree” but you know what. As they say, “it’s water under the bridge”. The troubled times are gone. Long gone. What’s left? The crème of the crop. It has risen to the top. I am darn happy to have been blessed by Pops being here.

Pops talks a lot of his family “on the other side”. He says one day there will be a reunion. It may seem a little selfish of me but I glad he is still around. He is one of the last direct links to my past. He is a treasure to me. I enjoy his stories and his company.

It’s my hands’ time. What in time are they going to say? What stories will be they be able to tell?

The Barber Shop…My first time back in years