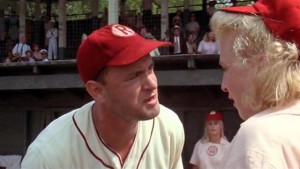 Anyone know Tom Hanks personally? Maybe can get a message to him from the kind folks here in Henderson,KY?

In case you didn’t know. Parts of  “A League of Their Own” were  filmed in Henderson 25 years ago. Tom Hanks and  fellow cast members (including Madonna and Rosie O’Donnell) spent several days here and used one of Henderson’s prominent homes for the boarding house scene in the movie! It was an awesome time and also an honor  for Henderson to be a part of such a great movie!

On Saturday Sept. 19th. Henderson Regional Hospital Foundation is hosting a fundraiser called “Movie on Main” featuring the movie “A league of their Own”.

So, if you know Tom Hanks. Could you run this short video clip by him? Henderson would be much obliged to you and if he can attend please ask him (on my be half, this is) to bring Wilson with him too! (It’s a different movie I know, but wasn’t Wilson a cool character?) ‪#‎MovieOnTheLawn