I sometimes simply amaze myself. One minute I am listening to Tex Ritter’s “Hillbilly Heaven” and the next I am listening to SLAYER! lol! For guys in the mid 50’s SLAYER is still kicking ass and taking names. Album, tour and repeat! 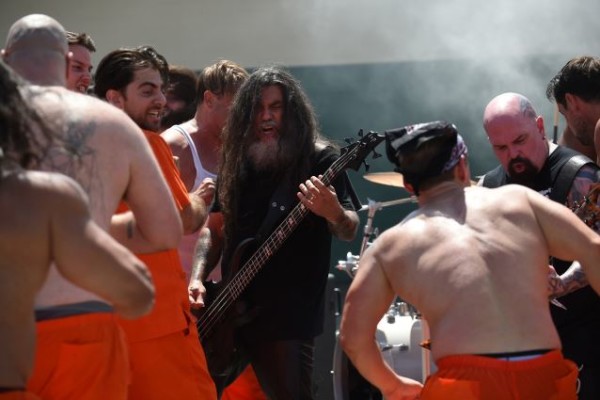 SLAYER‘s video for “Repentless” — the title track of the band’s new album — can be seen below. The clip was filmed on August 26 at the Sybil Brand Institute, the women’s prison in East Los Angeles. While SLAYER performed the track under that punishing sun over an eight-hour period, the “prisoners” had to stage a riot for somewhere north of twelve takes before director BJ McDonnell finally called it a wrap. But that was all pretty much in keeping with McDonnell‘s brutal vision for the clip, a vision that many in the veteran cast and crew referred to as “more like something for a feature film than a rock band’s music video.”
Read more at http://www.blabbermouth.net/news/video-premiere-slayers-repentless/#z5QgxZr0ZY5X3d2Y.99