Does anybody here remember Vera Lynn
Remember how she said that
We would meet again
Some sunny day
Vera! Vera!
What has become of you
Does anybody else in here
Feel the way I do?

I’m not especially fond of using a Pink Floyd song reference to start things out but I think its fitting for this subject. “Does anyone Remember”…anyone? Anyone at all?

I just read an interesting article about George Bell. Now I don’t know who George is but George isn’t alone in this “adventure” called life. He lived alone. He died alone. He was found “alone”. Not on the day he died. Nor the day after. He wasn’t missed. Society had passed him by. He was no longer needed. The Army that he serviced in years ago didn’t need him anymore. Nor want him for that matter after he died. (You’ll have to read the article link below). He never married. He wasn’t homeless. Not that it matters anyway. People are people. We all are from “somewhere”. We are all going “somewhere”. We all should stop and check on each other. But, we are all too busy to stop today. How about maybe tomorrow…? Or in poor George’s case, many days later.

The apartment belonged to a George Bell. He lived alone. Thus the presumption was that the corpse also belonged to George Bell. It was a plausible supposition, but it remained just that, for the puffy body on the floor was decomposed and unrecognizable. Clearly the man had not died on July 12, the Saturday last year when he was discovered, nor the day before nor the day before that. He had lain there for a while, nothing to announce his departure to the world, while the hyperkinetic city around him hurried on with its business.”

After reading about George, I thought about my Grandpa. Alone. Every day. If I don’t stop by he talks to…you guessed it. No one. No phone calls. His “family” is also too busy. His only offspring has their hands full at their house too. So Pop’s sits alone every day. Day in and day out. Pop’s isn’t the only one. How many human beings sit alone every day? Day after day. Week after week. Month after month? Year in and year out? How many are stranded in rest homes and have no visitors? What about shut ins? Or people trapped in houses or apartments that can no longer get out in the world? Homeless shelters? Parks? Under bridges? In cars? Their families too busy or not able to visit them? Or just don’t care about them? Or too busy to call them? Really? A phone call… A human touch. What’s that worth? A human touch. It’s PRICLESS. 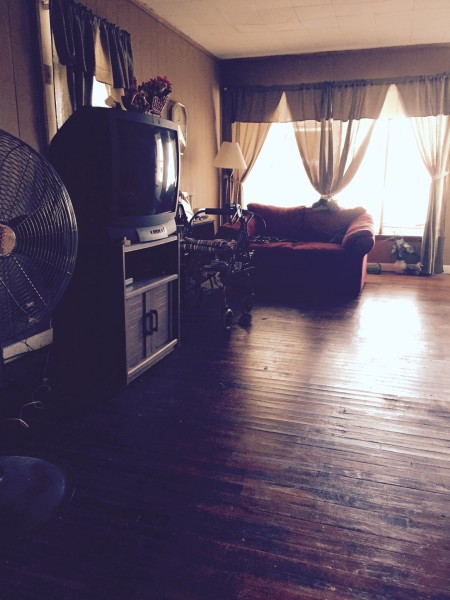 George apparently was a hoarder. Nothing wrong that I guess. I hope to never hoard but who knows what goes on inside someone’s mind. My Grandpa isn’t like that but he and George have a lot in common. They are both elderly. Lived on fixed incomes. George hoarded his money. Pops’ tries to insist I take the ten dollars from his shirt pocket every time I take him lunch. Most times I refuse unless he slams his hands on the table in anger. Then I have no choice. I guess it’s his way of “contributing” to his existence. At his age, it’s really all he can do anymore. So if I take his money I use it the next day to buy his lunch with it. His eyesight is almost gone. I went to hand him an ink pen the other day. I said “Here’s an ink pen Pop”. He reaches out for whatever I have in my hand. He fumbles and reaches blindly toward my arm. He is probably following my voice. He finds my arm and slowly “walks” his hands up to my hand and grabs the pen. I cautiously ask “Pop’s, can you see at all’? He made an excuse about his eyes watering but I know he can’t see very well. I turn the TV down so I can hear him. The thermostat is on 80 degrees. It’s hot as hell in the house so I stay maybe 20 minutes at a time. Make small talk and then I am gone. Like everyone else. I leave him alone. He is back to “silence”. Silence that I would bet at times it has to be so loud its deafening.

Pop’s isn’t forgotten by me. I go out of my way to see him but I fall short like everyone else. I am not here to heap loads of guilt or grief on anyone. But I get frustrated. I see the cobwebs behind the couch as I enter the door when I go there. I can write my name in the dust on his coffee table. Surprising sad is that I own the house. I am, in a sense, his landlord. The floors are dusty. He hasn’t been able to dust or clean since he moved in over five years ago. The house, still has solid bones but in much need of repairs and hasn’t had any attention done to it either. I moved Pop’s in on the premise that he would never pay any rent as long as he lived there. I have kept my word at the house’s expense. I did however somewhat naively expect his remaining family member to help me with him. That didn’t happen. When I call this person, it’s the same thing. “Yea, he is in his golden years”. I say “But he needs assistance”. I get “He can’t afford it”. I say “but I know someone that will cook him a meal and spend time with him for a few bucks a day”. Still the same answer. “Pop’s can’t afford it”. I do the simple math in my head again. Ok, He has lived here for over five years and hasn’t had a rent payment, so he should be sitting on a somewhat nice chunk of change that could provide him with an assistant but you say he is “broke”…”OK”(sarcasm highly on)… I grew tired of asking this person in charge of his finances and will refrain my opinion of said person until after the final curtain call… Back to the house, now when it’s storming and the wind picks up hard from the East, a roof vent will gladly against my will send rain down thru the rafters. Though in small amounts the ceilings now have water spots. If it’s a severe enough rain, it may leak. Not much, but a leak is a leak. I look around, no money to fix anything. No help from anyone and I look and feel like a slumlord but one with good intentions but none the less…a slumlord.

Pop’s has a stack of old phone books wrapped in an old dollar store bag among other things that need to be thrown away. I keep wanting to throw them out but he insists that I leave them alone. He won’t let me clean. I happened to catch him out on the porch here recently while it was still warm outside and I spent a couple of hours cleaning the kitchen. Lots of bleach, gloves and paper towels. When I was done…. Zero difference.

He is elderly, alone and for the most part forgotten. Like George Bell.

My mother was the same way. Same house. Pretty much the same set of circumstances. The only difference was she wasn’t elderly. She was sick a lot though. And just like Pop, fearlessly independent. She wouldn’t let me help her. Like George, She died alone. She wasn’t found the same day. I had spoken to her on Friday. She was discovered Sunday around Mid-morning. I had the duty of saying “Yes, it’s Ida Mae, my Mother”…

George apparently had been dead for a while. I won’t let that happen to Pop. Whenever it’s God’s will to call him home Pop’s won’t lay there abandoned. If it was up to his family member, and yea I am digging here, they wouldn’t find him for a month or so. The people assigned to help with George’s remains, though they didn’t know him or were family, handled him with dignity.

“The undertaker was a Christian, and believed that George Bell was already in another place, a better place, but still. “I don’t think everyone should have an elaborate funeral,” he said in a soft voice. “But I think burial or cremation should be with respect, or else what is society about? I think about this man. I believe we’re all connected. We’re all products of the same God. Does it matter that this man should be cremated with respect? Yes, it does.”

So where am I heading in all this?

The article was an interesting read. It traced George’s history from the junk they found in his room. The people that were in charge of him treated him and his belongings with respect. Respect he didn’t receive later in life. Maybe he wanted it that way. But I don’t think anyone wants to die alone and not be found. But this isn’t all of the story. The article follows George, his belongings, bank accounts and his beneficiaries. It seems he had made a will out over 30 years prior to his passing. Most of those people were now dead. George had hoarded his money so he left about a half million dollars when he departed. It’s amazing who wound up with it. People that didn’t even know George. Relatives of deceased relatives.

For that part it’s all the same. Estate sales. You’ve seen them. I’ve seen them. If we die alone with a bunch of stuff, it too will to more than likely end up at an Estate sale. Pretty gloomy isn’t it? It so cold. But dying alone? That has to be colder. It should never happen.

We all know someone that could use a frequent call. A frequent card. A frequent stop if they live close by.  A human touch. It doesn’t cost anything but its priceless.

The NYTimes. The Lonely Death of George Bell