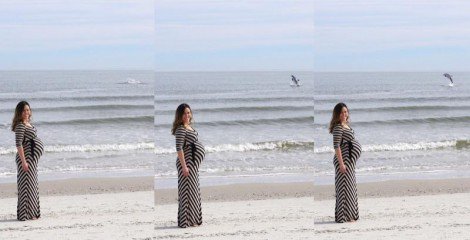 Camera phones — which barely existed even a decade ago — are awesome in so many ways. We can take pictures quickly and easily and share them with the world instantly.

Sometimes, something sneaks into a photograph unexpectedly and that’s exactly what happened when Dan Mozer began taking pictures of his wife on Atlantic Beach, Florida.

Mozer’s nine-month pregnant wife, Angeline was posing by the oceanfront last month while her husband took pictures. You can image his surprise when he realized he also captured a dolphin jumping out of the water in the background in what may have been the world’s greatest photobomb.