Man, this guy throws out the facts as fast as Cheap Trick releases any news. Not sure what happened but the band marriage is long over even though he is still getting his alimony…”On the drums, Mr. BUN E< CARLOS!” I never will forget that moment on the album… 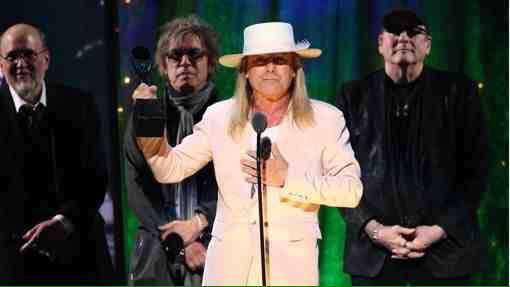 When I heard that Cheap Trick were inducted into the Rock & Roll Hall Of Fame and that the Hall and HBO had decided that the four of us would perform again it was humbling, and being re-united for that final performance was an overwhelming honor that I’m grateful for. I’m proud that the work we’ve done over the past 40 years was recognized.

This should be a time of celebration, we’re in the Hall Of Fame, Cheap Trick have a new record out, and I’ve go…t a new solo record coming in June. But it’s hard to celebrate when the other three Shareholders of Cheap Trick are in all the papers and on the radio calling me names and saying things that aren’t true. I don’t seek out the press and have laid low, sometimes making statements in response to theirs, and I don’t have a big machine behind me to promote myself. I’ve been in Cheap Trick for over 40 years and there’s a lot of dirty laundry I could air, but I prefer not to. It’s a bad look for Cheap Trick and for the four of us as individuals.

That said there’s a few things that now need to be addressed.

As was hopefully evident Friday night, I’m in great health and my back is fine, has been since the corrective surgery many years ago, neither my back or my health has ever limited me professionally. I continue to play drums everyday, perform about 3 dozen shows a year, and now that I have a record deal I look forward to recording regularly, I’m doing well.[hmtad name=”Adsense Unit 1″ align=”floatright”]

I no longer tour or record with Cheap Trick because the other Shareholders asked me to allow them to use a hired drummer instead. I reluctantly agreed provided that I wasn’t thrown out of the businesses we spent our whole lives building together. But then they cleaned house and under the advisement of their new team tried to remove me from our companies, which at the end of the day didn’t end well for them.

From day one the four of us in Cheap Trick have been defined by the unique sound and energy we have when we’re on stage or in the studio together. When Tom quit in the ’80’s we brought in salaried musicians, and they were very good, but without Tom the recipe was different. And seven years later, after Tom returned, I was the one who insisted Cheap Trick restore his corporate rights. We all realized that the four of us together have something special, so special that it made it worth getting a quarter of the earnings instead of a third. Last week I finally saw them play with our salaried drummer on The Today Show and it was like seeing Cheap Trick without Tom, or perhaps to borrow from what recently Rick stated in Rolling Stone, “…three men and a baby.”

Few bands get along after 40 years but for the sake of Cheap Trick I truly hope that Rick, Tom, & Robin can drop the gloves, stop the ugly name calling, and find a way to live and let live.