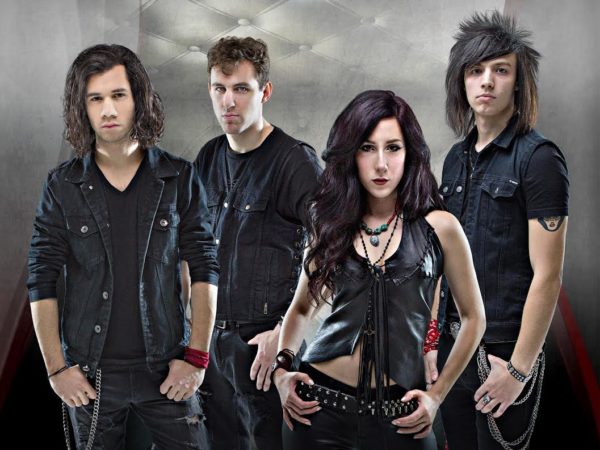 Welcome to Kick Acts. Tell us a little about yourself and where you can be found online.
-KT: “My name is KT Paige. I sing for Romantic Rebel and I’m the Disney Princess of Horror. We’re most active on Facebook (Facebook.com/RomanticRebelRocks) so make sure you check out our page to see when we’ll be tearing up a venue near you!”
Who are your musical heroes and influences? Why?[hmtad name=”Adsense Unit 1″ align=”floatright”]

-KT: “I’m a huge fan of Stevie Nicks. I love her singing and her style in general. I also love Alice Cooper and Danny Worsnop for their music and stage presence.”
Do you have any advice for someone just getting started in the music business?
-KT: “Definitely network as much as possible and make as many friends in the business as you can. Also, you can only play the same circuit for so long. If you want people to hear your music, you have to tour outside of your city, state and region.”

What piece of advice did you ignore that you wish you hadn’t?
-KT: “Nothing comes to mind. We usually take all advice we receive into consideration.”

Do you have a greatest gig story or worst gig horror story you’d like to share?
-KT: “Playing Louder Than Life Fest was one of the coolest gigs we’ve played to date. Running into some of my band friends, as well as some of the musicians I look up to backstage, was pretty cool!”

Do you have any other hobbies other than playing music? Collect stamps? Collect hats from off the side of the road? Draw pictures of peckers or boobs? Make sock puppets? Sit in the dark and eat Cheetos?
-KT: “I paint a lot of zombies and puppies.”

What do you think about the current music scene or lack of? Care to address that?
-KT: “It seems that a lot of bands nowadays feel that they don’t need to actually play their instruments or sing when they play shows. Sometimes the band’s album was produced to make the band sound better than they really are and when the time comes to perform it live, they can’t live up to the perfected sounds on the recording. So as a result, they use a multitude of tracks to give the illusion that they can actually play their parts just like the album. I’m not talking about background synth or strings that can give a live song body. It’s when singers are moving their mouths to melodies that are out of their range and guitarists are moving their hands up and down the guitar neck to a complicated riff. The way I look at it, if you can’t play it live, don’t put it on the album.”<——–HELL YEA I AGREE! (Editor)

Do you think reality shows like American Idol, X factor and The Voice have helped or hurt the music industry as a whole?
-KT: “I don’t think it really affects it. Excluding: Adam Lambert, Kelly Clarkson, Carrie Underwood, etc., most of the contestants on the show rarely make a dent in the industry after the show ends.”

What is your opinion of unauthorized music downloads?
-KT: “It’s a problem that is always going to occur. So the only thing you can do is think about the fact that your music is being spread around, even if it’s not in the most ideal manner.”

Tell us something about each of your band members that we wouldn’t expect to hear.
-KT: “Alex is a huge fan of all things Star Wars, Marvel and DC. Zach is completely obsessed with candy. Ty claims he loves Stars Wars, but he still hasn’t seen The Force Awakens.”

Which would you rather hear in concert? Lip syncing or real vocals?
-KT: “I think you know my opinion of this by now.”

Who, or what, is the next big thing?-KT: “Only the Music Gods know the answer to that…”

[hmtad name=”Adsense Unit 1″ align=”center”]
One artist you can’t get enough of and can’t live without is…
-KT: “Right now, it’s Fleetwood Mac, but that will probably change next month.”

Favorite movie of all time and why.
-KT: “Hardest. Question. Ever. I have an answer for every genre.”

Our last question is called “Shout It Out Loud”. It’s where you get to talk about whatever you want to talk about. So go ahead KT PAIGE and “SHOUT IT OUT LOUD”!

-KT: “We’ll be heading out on tour this Summer, so come to a show and party with us!” 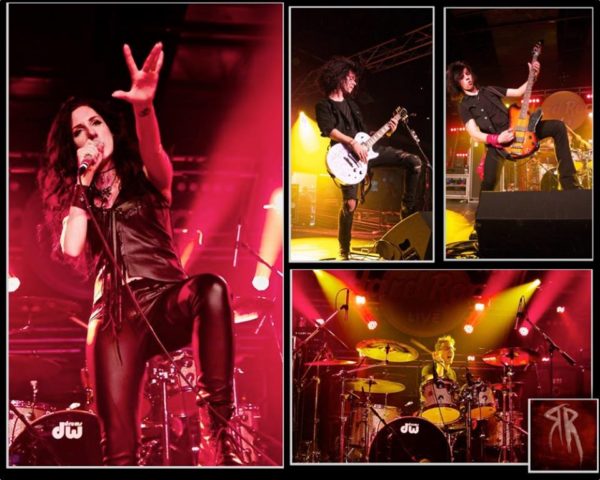