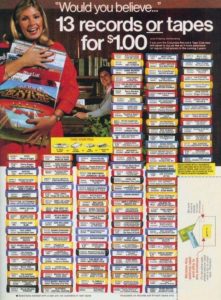 Do you remember the “Tape of the Month” club? Way back in the 70’s my little brother and I got a couple of guitars for Christmas and we needed some music to try and figure out how to play. My little brother being bolder than me got our Grandmother to buy us “KISS Alive I”. It was our first introduction to real rock music. We were turning our heads from the music that was her music to music that was for our generation. Who would know that as an adult I would love all that old music she played on her record player every Sunday while house cleaning. But now back to the “Tape of the Month” club.

We used to get these ads where you could order a bunch of 8 track tapes all at once or they would send you a tape a month automatically. Once again enter my little brother. The one that didn’t have any “stops”. You know that little cricket in your head that says ‘Don’t do that”. Well, his cricket never said that… He started ordering these tapes. They would show up every month. He might have been 12 years old at the time. We never paid for any of them but the tapes kept coming in. Maybe our grandmother paid the bill but I guess I’ll never know if she did. But month after month a new tape! Some of the ones that I remember were Steve Miller’s “Fly like an Eagle”. There was also a Crosby, Stills, Nash and Young tape (The name escapes me), a Movie sound track tape with the theme from “New York New York” on it and then a tape from a band called “Angel”. The album title was called “White Hot”.

White Hot. What an incredible album. From start to finish. The band was the exact opposite of KISS. Which they have been compared to and pitted against for years. Both bands were awesome. KISS had the larger than life persona and was the first band I saw in concert. They were mystic. Cool as hell, but scary. Like watching a horror movie in real life. Angel on the other hand were “heavenly’. All dressed in White. Their name spelled “Angel” right side up and upside down. I studied the cover of the 8 track tape as much as I did the KISS gate folds. Remember folks, back then the internet didn’t exist. Magazines only came out once a month or quarterly. There were no video channels. You only knew what you knew about bands from their album covers or the occasional article you could catch about them in a magazine that you had to go to a store and read. You put the tape or album on, hit play and  let it play over and over while you studied the album art!

Just like KISS, Angel had their own recognizable players in the band. From Frank DiMino, Gregg Giuffria, Barry Brandt, Felix Robinson and last but definitely least, the sex symbol of the band and Guitar player Punky Meadows. As a young guitar player at the time I was mesmerized by Punky’s playing. He has great taste, tone and feel. Never plays over the top. Plays for the song. The band had strong songs and all the cool stuff that bands back then needed but Mtv was a couple of years away still. And despite releasing great music, Angel disappeared before the dawn on the 80’s rock scene. Too bad, the world would have loved them. I know I have.

It’s been 35 years since Angel was around. The fan base is still around and growing. People are finally catching up to what we fans knew along. Angel was a Helluva band. 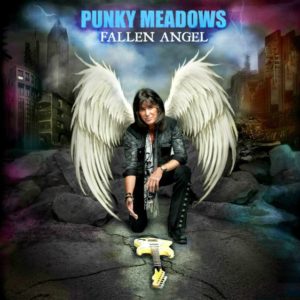 And now Punky Meadows has released an album. A helluva album too. It’s called “Fallen Angel”. It also has two Bonus tracks with Frank DiMino on vocals too! I have had it for 3 days now and it hasn’t stopped “spinning” in my CD player. Just like in the old days! It’s that good!  It’s so far away from all the mundane cookie monster vocals and overplayed Drop D stuff we have today. It’s a breath of fresh air. Great songs. Great hooks and great guitar playing by the legend himself! This album is the album the world has needed for the past 35 years. It’s as if Punky caught 1978 in a bottle and mixed it in with 2016! A perfect match! Punky and the band has managed to capture the music we grew up on and kept it relevant for today too! It’s cruising music. Its backyard yard party music. It’s a California sunset on the beach music! It’s Rock and Roll!

The album has something for everyone. From the opening “Angelic” spoken words from Heaven telling Punky to “take his harp and make sweet music” and then rolling right into “The Price you Pay”. What a great song. It has that Bad Company, Bob Welch, 38 special feel to it. “Straight Shooter” is the first single released with a video. Another great song! (More music videos Punky please!)

Any other great songs on the album? Yes! All of them. I could go on and on! There are sexy gritty guitar riffs and catchy vocal hooks throughout it. The whole band is amazing! Lots of rock and roll attitude on this disk! That’s what makes music “Music”. It really has been in my CD player since I received my copy! It’s all thrills and no fills on this one!

To pick your copy go here!

You may still have a chance to pick up an autograph copy here!