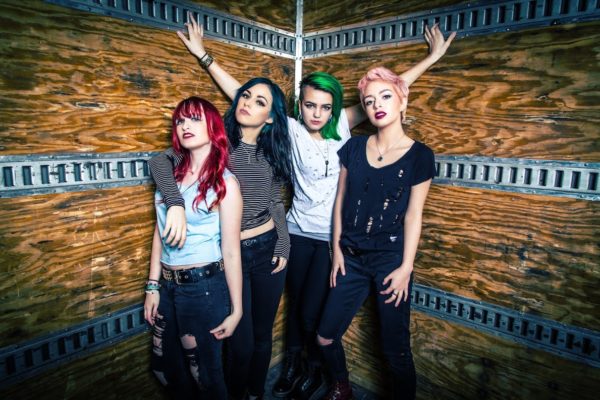 Welcome to Kick Acts. Tell us a little about yourself and were you can be found online.
We’re an all girl hard rock band from Phoenix, Arizona! You can check out our facebook (Doll Skin), our website (dollskinband.com), or follow us on Instagram and Twitter! (@dollskinband)

Who are your musical heroes and influences? Why?
Meghan: My Chemical Romance, Refused, Avenged Sevenfold, Tool, and Underoath. They’re all so different from each other but so powerful in their own ways, I take a lot of inspiration from all their styles when writing.

Alex: I second Avenged Sevenfold. Orianthi, Rancid, NOFX, Dead Sara and John Scofield for sure too. I like the contrast from jazz (Scofield) has with the other kinds of music I listen and it influences my writing style a lot.

Do you have any advice for someone just getting started in the music business?
Nicole: Practice, practice, practice. Take as many opportunities as you can, no matter how small they seem because you never know who will be there or what it’ll bring. Be confident in yourself and what you’re putting out, if you don’t love it why would anyone else!

Sydney: Be flexible and open minded. Listen to every type of music and expand your taste.

What piece of advice did you ignore that you wish you hadn’t?
Alex: We didn’t really ignore any advice, there are just certain things we didn’t know before that we know now.

Do you have a greatest gig story or worst gig horror story you’d like to share?
Meghan: Whisky A Go Go for sure!!! We played a sold out show with Metal Allegiance the night of the Lemmy memorial on Sunset Strip and it was crazy. So many of our music idols we’re in the same room as us and we met a whole bunch of them. The show was amazing and the response was much better than we expected, just a wild night we’ll never forget!

Nicole: One time we got invited to this “festival” in Tucson. They advertised it to us as a up and coming Warped Tour but when we got there it was in a random park and the “stages” were just grass patches. The whole thing ended up running like 3 hours behind and we didn’t even end up playing because our set got pushed back so far. It was one of those things where the promoter royally screwed up, didn’t pay any of the bands or promote it and no one even showed. Horrible horrible show haha.

Do you have any other hobbies other than playing music? Collect stamps? Collect hats from off the side of the road? Draw pictures of peckers or boobs? Make sock puppets? Sit in the dark and eat Cheetos?
Meghan:Photography! Go like my page on Facebook “Meghan Herring Photography”! Writing poetry and lyrics and stories.
Sydney: I like photography too but I’m not as serious as Meghan haha. I like dying hair.
Alex: Cooking and drinking coffee. Not eating meat.

Nicole: I like to draw a lot but I don’t do it as much as I used to! I really love makeup too and really any form of art.

Nicole: Our local music scene in Phoenix is really cool and there’s a lot of interesting new music coming out of it. I would describe the Phoenix scene as really artsy and wacky and is incredibly supportive to bands that are exactly that, artsy and wacky. Personally I feel there wasn’t the best support for us until we got out of the scene, but I still love the scene and consider myself pretty involved in it.

Sydney: Everyone’s in it. Everyone’s connected somehow which is really cool. Whether from photography or playing in multiple bands, it’s very connected.

Do you think reality shows like American Idol, X factor and The Voice have helped or hurt the music industry as a whole?
Sydney: Hurt. It’s made mainstream the only thing that can succeed in. It’s not true, it’s made it harder for rock to make it big

Alex: It presents music as being only one way. You have to look one way, sound one way, act one way. Music is so much more than what those reality shows show you.

What is your opinion of unauthorized music downloads?
Nicole: I will illegally download absolutely everything, I’m the worst at it. As a musician I see how it can hurt musicians but honestly I’d rather have people be able to hear our music for free than not at all.

Alex: I buy a lot of CD’s but I’m terrible at illegally downloading. I wouldn’t listen to 90% of what I listen to if I couldn’t get it for free.

Tell us something about each of your band members that we wouldn’t expect to hear.
Alex is the biggest book nerd ever. She’s planning a cosplay for NerdCon 8 months in advance.

When you wake Meghan up she jumps, no matter what. She makes this little noise and all of a sudden you’re like “oh. Meghan’s awake” Sydney had a really hardcore One Direction phase. Before she started listening to the music she does know she was obsessed with One Direction.

Nicole’s secretly loves Kanye West and Nicki Minaj. Don’t ask her about it.

Hypothetical situation. You’re on Gilligan’s island and you get to hook up with only one of the survivors… Which one and why?
Nicole and Alex: We have no preference….

Meghan: The island itself

Sydney: I have no idea……

Meghan: Of course we know what vinyl is! I have a huge collection of vinyls I’ve gotten through the years. Too many to name to be honest!

You’re marooned on an island with Justin Bieber. Do you choke him out the first night in his sleep or what?
Harvest his organs. And cut off his nasty dreads.

What is your opinion of Miley Cyrus?
She’s just doing her thing! She’s just really carefree and living her life. She seems happy, there’s nothing wrong with her! None of us really listen to her music but as a person she seems pretty cool and confident. And her dogs.

Is this even a question!!! Of course real vocals, if someones paying to see you perform it should be 100% authentic.

One artist you can’t get enough of and can’t live without is…
Barry Manilow.

Confession time. Share a secret about yourself.
We are lizard people. Lizards in disguise. Hillary Clinton anyone?

Favorite movie of all time and why.
Nicole: High School Musical 1, 2, and 3
Sydney: The Never Ending Story
Meghan: The Conjuring
Alex: Alice In Wonderland (non-cartoon)

TED CRUZ IS THE ZODIAC KILLER!