1. Hey Jesse, welcome to Kickacts. com. Tell us a little bit about yourself.

Well, I was born in 1953, the same year as Playboy, and the Corvette, happily we are all still around!I started in music way back at Harwood grade school,  then I was in everything music related at North, back then we had some great drummers there,which were older than me…Pat Moore, Mark Wichser, Mark Savage, Jeff Taylor..I was in the marching band, pep band, concert choir..you name it 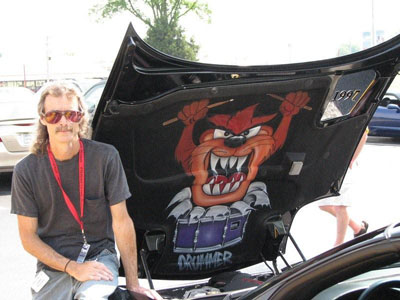 2. You currently play drums in the band “Common Ground”. Tell us about the band and who is in it and the website address you guys can be found at.

Common Ground has been around for 4 years now, Chad and Brian Lynch are brothers, and come from a musical family. Their Dad Paul playedin a top country band around here in the 60’s and 70’s..” Country Inc”…Chad was originally a drummer, he is multi-talented and decided one day to quit hauling around drums and talk to me about forming a band. i had always told him if he made the switch that I would like to work w/ him. i worked with Brian in a few bandsand so I was convinced this would work.  our schedule and info is at http://www.myspace.com/commongroundcountry also on bandnut.com, what we strive for is our vocals,  those guys sing great, and we have 3 lead singers…I feel our vocals is what stands out, when you hear us.We are a cover band new country and classic rock..Big and Rich..to Judas Priest..!!

my main kit is a 2007 Gretsch 6pc, with a Gibraltar rack, Zildjian cymbals, DW 5002 pedals. I just bought a Ludwig Vistalite acrylic 3 pc kit, amber in color, that I use on some gigs too, acrylic definitly has a different drum sound…bright with alot of volume, I spend my money at Forks Drum Closet in Nashville, if I need something…they are one of the best drum shops anywhere.

4. So when you were traveling on the road, did you travel in a station wagon or one of those old smoky diesel buses? Ever paid your dues and froze your ass off in what ever you were in?

This is hard to believe now..our bass player was a mechanic and we restored a 1961 Ford Econoline van..back in those days our equipment fit in it , this is before Subs, and high end PA..it was all hi impedance gear then..and we took a car with us too,.this was before cell phones, GPS..so we got lost sometimes…we ran from Cleveland to Savannah.. we had 5 of us in a room, we were tight with our money..I remember going from cleveland to Monroe Lousiana…one gig to another and  sleeping on the floor of a 1972 LTD..the tranmission hump was uncomfortable..lol..but I was 18 ….youth on my side.

5. Do you have any “greatest gig ever” stories to tell?

greatest gigs…they are all great in the respect that im playing music that particular night, what more can you ask?but when I was living in California I had a great club The Cattle Baron..w/ the mechanical bull, this was the Urban Cowboy craze..that band had terry chrisftofferson from Buck Owens…In 1972 I was on the road and there was another The Stables in mentor, Ohio.. a 300 seat clubthe executive in paducah ky was cool back in the day…

6. And in the same vien, got any “worst gig ever” stories to share?

One of the worst was in 1972, we were at a gig scheduled for 2 weeks, for some reason the clubowner was a control freak, bitching between sets etc.we called our agent, he told us to get outta there at the end of the first week, he re- booked us some where else, another time at Johnny’s Inn on morgan avenue,after the club was closed, the manager was drunk and shot off a few rounds out of his gun..a bullet went thru 2 drums.the next day, he was apologetic, and bought me 2 new drums!! 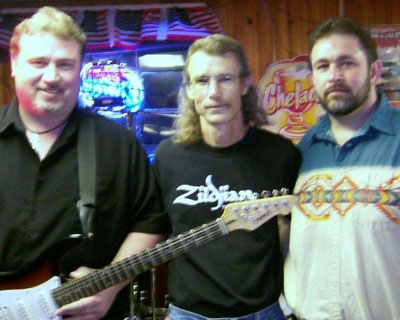 7. You have been playing since 1968, correct? What was it like in the beginning and do you have any advice for the young musicians up and coming in this area?

you can’t imagine the scene in the 60’s and 70’s if you werent old enought to remember, When i was in high school there were after football game shows in these little towns, a teen club in grayville, Oakland City, jasper calumet, kramers lake and Wes-lake,….just a bunch of gigs back then, the was an agency booking bands locally even then…I got my first steady gig by posting an ad at Dallas Music.  there were some great bands then, Unpredictables, Free Reign, Turks, Chocolate Haystack, The Vikings…these were bands that played the area, most guys were in high scool…When I came off of the road, there were all kinds of clubs here, I was playing 4-6 nights a week, so many places had bands it was crazy, i played full time until 2000, from 1974 until then my only job was in a band somewhere.i played a long time at the Exective Inns when Bob Green was alive and the owner…all 3 had music 6 nights a week, plus The evansville one had a showroom,with a house ochresta..imagine that! My buddy gary Stephans played in that band and backed alot of stars in those days.I saw Jerry lee Lewis, kenny Rogers with The first edition..Little Richard…Green booked major talent in those days,,..it was happenin’russell lloyd construction killed a couple of clubs, plus alot of clubs aren’t around anymore, for example, captain den, Joe’s bar, Country palace, Bridgeview, El matador,Red garter, Trixies Alibi, Duffys tavern, Red Fox…it aint the same now! about 1982 or ’83 the first drunk driving laws, changed the business to an extent.As far as advice for younger guys…well the biggest problem is finding a place to play and learn the ropes..i had it easier when I was a kid..there were gigs.I was playing in strip bars at 17…until they checked my I.D.  The internet is a good tool for getting yourself out there, but what is needed in my view,obvoiusly is more gigs!!

My heroes..Buddy Rich and the reason Im playing drums probably is Ringo and the Beatles…when they hit it was a cultural shock..never been the same.suddenly guys wanted to learn an instrument and play in a band…meet girls, play music, grow your hair long and piss off your parents..Also I had great teachers in school..Jerry Hoover a legend at North…Pat Moore, my first drum instructor…the list is long..

9. Damn, seems like you had a full plate of giging, which is what we all strive for..during your time playing did you do any recordings of original music? if so, what did you do and do you have any mp3’s you wanna share with us?

I dont have any stuff on the net except a clip of a song I wrote on myspace….which is track 3.I have a whole album of another band from 1982 ” Black    River…original songs, that I need to get a CD of to load to the internet..

I want to shout it out…to all my friends that I have worked with over my 41 years in the local band scene..some arent around anymore..but that happens,some quit, got old…cant  do it forever, but Im trying to…also the club owners that support live music around here…those people are in an ever evolving, difficult business…but we appreciate the opportunity, to have a gig…this year is starting pretty good forCommon ground, we are busy, and that’s a good thing..Chuck, thanks for the opportunity to tell everyone about the band…