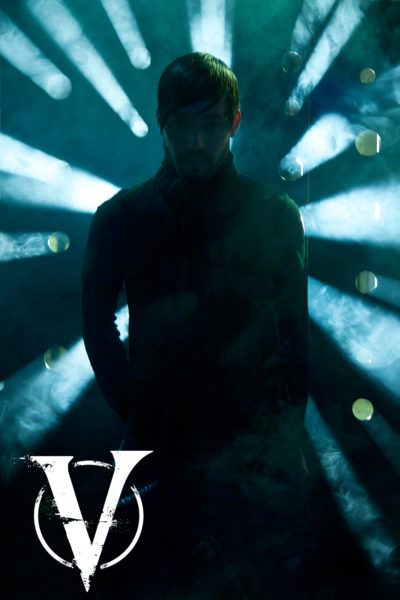 My name is Russell Ray drummer and Co-Founder of VYCES. You can find the band on Facebook under Vyces/Official. That is the same for all other social media sites and the website is www.vycesofficial.com.  I can be found under Russell Ray on Facebook, and skinzman on instagram.

Well I always start with Motley Crue. They were the first Band that I got into as well as my first concert which made me want to pursue playing Rock music in the 1st place.

When I saw the video for “Wild Side” I knew immediately that I wanted to play the drums.  Over time I got into heavier music like Pantera, White Zombie, Korn, and Slipknot. Those bands inspired me to develop a more aggressive approach to playing. However I love bands like the Deftones, Starset, and Chevelle. I love the elements of rock songs through those bands.

Be open to everything and attached to nothing. What I mean by this is to explore, be creative, and find people who want to work as a team. Things don’t always work the way you think they will so be willing to adapt and keep moving forward. Every ending is a new beginning. Be honest, dedicated to your craft, and always listen and be observant. Everyone has different experiences. Learn from them, and keep your circle clean. Also-NEVER GIVE UP!

Jumping the gun on signing a contract. I was advised not to sign for a project years ago that I thought was the one. I did anyway and it was a nightmare to get out of when things didn’t go right.

Best gig hmmm…There are so many that are up there but if I had to name one it would be the very 1st VYCES show in San Diego. The reason why is because Dave and I have talked about being in a band together for the last 8 years. We were never been able to until now. Other than Mark I have played in bands in the past with Shawn and Evan and I always admired both of them personally and professionally. I loved being in bands with them so for me it was my dream team of a band coming together. When we all hit the stage together for the first time- I felt the band really fire on all cylinders and it was electric. Has only gotten better.

Outside of music I write. I am working on a book and a movie script as well. I used to work at a magazine for a number of years, but I really just wanted to write for myself. As far as hobbies however it would be working on cars. I love rebuilding and fixing them. It’s therapeutic for me and I love doing it.

Sure! To me it always comes down to awesome bands that write awesome music.  If a band writes something they believe in and work hard to get it out there then people will get attracted to it. Everyone is different and like different things. It’s when bands copy each other or have no integrity that causes over saturation of nothingness. Keep it real-people will connect.

I think it has helped TV more than music. I mean there are a number of artists careers that it helped, but how many can we really name and remember. I think the TV ratings are what has gone up. Plus that is not the reality of how bands start. It’s a TV show.

It is what it is. We want everyone to have access to our music so however they can get it they get it.

I have honestly never watched the show so maybe I should check it out. Ask me next time hahahahaha

I do! I collect vinyl. I have every Slayer record and Motley Crue record on vinyl, and a bunch of limited edition foreign and domestic releases from many bands.

No…I wouldn’t choke him. If we were stranded I might need his help to get out of there.

I have never listened to any of her music, or paid attention to what she does so I don’t really have an opinion.

Ooofff I don’t know. There are so many bands out there…..but check out There for Tomorrow, White Knuckle Riot, and Invidia. Awesome bands!

NIN. Trent Reznor never lets you down. How to Destroy Angeles is incredible as well.

I read allot of self help books. I like educating myself on controlling your thoughts and emotions to help grow as a person instead of going backwards in life.

I prefer to live with a peaceful mind.

Rocky 3. It’s the first time that I have ever felt the feeling of inspiration. Also it shows that when you get knocked down there is always a way to get back up and fight. I apply that to life and most of my experiences. Rise Up!!

I want to give a huge thank you to everyone who has checked us out live, listened to our music, looked us up online, promoted us, and given us any time of the day. We are putting ever ounce of our passion and drive into VYCES and we are so thankful for the response, and inspiration from everyone. We hope to see you all soon and thank you Kick Acts for your time as well.  Peace and Love…….