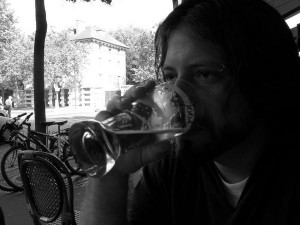 1. Hey Chaz, welcome to Kickacts. com. Tell us a little bit about yourself and do you prefer to be called Chaz or something else?
Thanks, happy to be here.  I have been called many names, some good, some not so good.  It’s not that I’ve ever been called an asshole.  I’m a nice guy.  With a name like mine, you get Chuck, Charles, Charlie and Chaz.  Old friends usually call me Charlie.  Legally, I am Charles.  Those who are not “in the know” refer to me as Chuck.  And amongst fellow musicians it is Chaz.  I prefer Chaz.  But I will answer to all of them…sometimes even to “hey you.”  I guess it helps me keep the personalities in check.  Thank God I have a brain.  Sometimes you get too many irons in the fire and it will test ya!
2. You currently sing in the band Akacia.  Tell us about the band and who is in it and the website address you guys can be found at.
Akacia…I like to think we rock.  It’s like the saying we have at Bandnut.com “It’s All About Having a Good Time.”  If we didn’t love what we do, then we wouldn’t be doing it.  The more the merrier.  The beginnings of Akacia date back a few years. To make a long story short…I came into the picture about 5 years ago, when the band as called Exosonic.  I was playing bass at that time.  (I’m actually a guitar player.)  Some guys moved away and some guys joined.  We then were lucky to find Lee Ramirez.  Great guy and great bass player.  We took the name Akacia…for various reasons.  The common thread was Iron Maiden.  Change the spelling a bit and voila!  Lee moved on and the luck just kept coming when we met Fred Basset.  The man has been around and we are lucky to have him in the band.  Joel Doehrmann is the man behind the drum kit.  Solid.  Joel is basically a legend in the EVV music scene, going back about 25 years.  Mike Blemker and I round out the band.  Both playing guitar.  Mike has been in the band since it’s conception.
You can find us here:
www.myspace.com/akacia
www.akaciarock.com
www.bandnut.com
As for the music.  We play so many different places in the tri-state.  We have learned to play songs from the 70s to today.  So many different types of bars and people want so many different things.  We have diversified ourselves.  That’s why we can play some many places.  It may confuse some people sometimes.  You might see us at a bar playing all classic rock, because thats what they want.  You might see us at O’Brians Sports Bar playing the classic rock, with some 80s and the new stuff. Its all good once they get to know what we are about.  We can play a small classic rock bar, then the next week play Fast Eddy’s.  That’s an asset.  We aren’t cornering ourselves in the market.

3. What type of vocal gear do you use?

I prefer a bit of reverb, quick & tight, some compression, if available and some delay.  Not too much, but enough to help fill the room.  It all depends on where we are playing.  Some rooms supply the right acoustics so effects aren’t needed.
I use a Shure SM58, with EV wireless in-tow, just in case if I feel the need to wonder about.  Nothing too special.
4. You used to be an on air DJ that went by the  name of C.C. What did that stand for and why do most DJ’s use radio names instead of their own real names. And while I am asking, do you have any plans to get back on the air? And one other, hey it’s a four part question:). Got any great DJ stories to share with us all?
Radio is fun.  Yeah, I was known as C.C.  I was told that my real name was not “rock enough.”  They didn’t like Chaz.  So I choose C.C.
i.e. C.C. Deville (Poison) C.C. the drink and CC, as in engines.
It worked.  I never really cared for it, but like I said…It worked.  Jocks take radio names for various reasons…because their real name sucks, they don’t want their real name mentioned or to better relate to the audience.  Something short and easy to remember.
Market yourself!
I do have plans to get back on the air.  It’s in the works right now, but it’s some top secret shit, so I’d have to kill ya if I told ya.  DJ stories?  Too many.  I used to work with some great people at WABX.  We were a force!  Everyone helping each other.  We all had each others back, knew the market, studied it, bled it and led the lifestyle.  We had the talent and knew what it took to make good radio and relate to the listeners.  Then it broke.  The boss moves and a new guy comes in a changes everything.  I could ramble for days about what happened, but I won’t.  Basically you have two types of bosses.  The one that works with everyone and we go have a beer after work and the one that thinks he is the station.  I’m not one to say which one is better in the biz, but I know which one worked.  Just look at the ratings.  And those on the inside defintely know.  It was good times.  I met Def Leppard, Alice Cooper…drank backstage with the tour manager of George Thorogood.  Alice was the best.  He was a down to earth type of guy.  Alice on stage, and a different guy backstage, gracious to all his fans and would autograph and talk about anything.  He did have this flaky guy following him with skittles. That was weird.  But if I would have the same if I was freakin’ Alice Cooper.  As for a bad story…there was this guy, never knew his name, HARD CORE listener, never showered and always showed up at remotes to get free stuff.  If I spit on a bottle cap and signed it, he would take it.  I remember this one remote.  He showed up with a St. Louis entertainment magazine, asking me about strip clubs.  He started to sweat.  Kind of creepy.  He grabbed some free stuff and headed out.  Moments I could of lived without, but moments I will never forget. 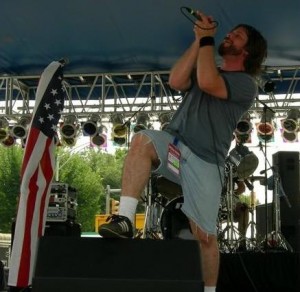 5. Do you have any band “greatest gig ever” stories to tell?
Three things: Boobies, lesbians and a fight. (being realistic)
You get two of them and it’s a good night.
You get all three and it’s the tri-fecta of gig-ism.
Oh, you can still have great shows, but those just make it more fun.
If the crowd is having fun and drinking then we have fun. The more people, the harder we play, the more fun we all have.
6. And in the same vien, got any band “worst gig ever” stories to share?
We’ve never really had a bad show.  I guess you could say small crowds.  It happens to the best of us, never really the bands fault, but you just chalk it up and move on.  I don’t let bad things affect me too much.  There’s always a way to work things out.  Plug in, play and do what you do, with what you got.
7. I get to bust your balls a little bit here and I hope you take this in fun, but since you are the first  singer that we have interviewed, is LSD or “lead singers’ disease” just a myth or not? Please explain …
LSD…don’t do it kids.
Yes it’s real.  Why?  I have no idea, other than the attention a lead singer gets at shows.
I always say “apply ego where needed.”  Yeah, I’m a front man.  No, I don’t need a 4 foot square in the middle of the stage and a spotlight.  Akacia is 4 guys.  I am nothing without them.  We need each other.  My stage is the room.  I might be singing next to Joel, maybe next to Mike or Fred, or even in that 4 foot square, but I won’t stay there.  I am not a spotlight whore.  Attitude and ego…when needed…where needed.  You have people saying that you’re a great singer…that’s adds to the LSD.  In the grand scheme of things, there is always someone out there better.  It’s best not to think about it too much and like I said, do what you do, shine when you can and go home with a smile and the feeling of a job well done. Plus, I play guitar and sing.  It’s not like I can swing from the lights.  Get the guitar off of me, which does happen, and I might try though!  I just have fun.
8. Who are your heroes and what inspired you to take up singing?
Heroes…Well, since I am a guitarist first.  James Hetfield.  He is the reason I learned to play.  Not for chicks, that came later.  Tight, fast and chunky! The guitar playing, no the chicks.  Over the years I have learned to appreciate much more.  Jeff Beck, Joe Satriani…even locally.  There’s a ton of talent in the EVV area, just take the time to listen.  I even look up to Mike, the other guitar player in the band.  He has the discipline to learn songs as they are, while I just do my thing.  I admire that.  I’ve been one to play a song exactly as it is on a cd.  Both disciplines have their pros and cons.
I started singing because we needed a singer.  Good singers are hard to find.  I knew I could do it.  I used to, years ago in another band, but I was smoking at the time.  Smoking and singing is fine if you don’t need to bust a nut in the high range.  It was killing my high range.  My voice has developed nicely over the years and I have learned how to take care of it.  Throat Coat Tea, etc.  There are many ways to save your voice.  Radio taught me a few things too.
9. I noticed on your myspace page, you have “I am Chaz”. Is that some type of declaration or just an informal statement? Just curious since my first name is Charles and yours is Charlie? And usually people with that name are highly opinioned and usually think they are always right. I mean I do:)  Is that a fair statement concerning you?
I am Chaz…plain and simple.  I need no declaration.  Nothing witty to say…so I am Chaz.  Nice to meet you.  And I am always right!  I am an Aries.  Beautiful, charming, but don’t cross me.  It takes A LOT to get me angry.  I mean A LOT.  But when it happens? Ok, so I am not always right, but for the record, I am until I am proven wrong.
10. # 10 is called “Shout it Loud”. It’s where you get to talk about whatever you want to talk about.
So go ahead Chaz, and “SHOUT IT OUT LOUD”!
Hi mom. Hi dad.  Hi everyone. I am Chaz. I am 1/4 of Akacia. We Rock. We like to have a good time and play music for you. No teeth? No problem, we play for everyone! No clothes, we shall clothe you with rock! No shirt! Rock On! Come see us sometime. You can see our schedule at:
www.myspace.com/akacia
www.bandnut.com
Thanks Chuck and kickacts.com!
Previous Post: “Star Ship Troopers 3” Movie Review
Next Post: Keepin’ it real!