1) You’ve been a DJ at WABX for as long as I can remember. Have you been there from the beginning? Is it the only station you’ve ever worked for?

Yes…12 years now with WABX. I got this gig while working at WIKY. I was there 5 years prior to the conception of WABX. 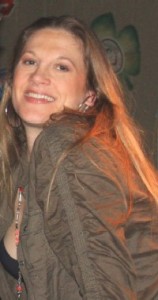 Sexiest DJ on the planet!

2) Being a radio personality and a female has to have its drawbacks. Have you ever had issues with listeners “going too far”?

Only one and that was our 1st year on air so I don’t think it really counts…I had to knee a guy at the Thunder on the Ohio beerstube (you might remember a great band from Chicago called “Gizzae” or not…but they were very cool.)…sorry to that guy…but he wouldn’t back up! We all need space now and then.

Other than that…nothing. Thanks to my size, I’m sure.

3) When Aerosmith and Cheap Trick came to town, you were the DJ selected by the limo ride winner to join them in the skybox. There are other events that the station did like this. Tell us some of your favorite moments from doing this kind of stuff.

That was one of the best times…plus dinner at Outback! Thanks again ANTHONY! The entire party rocked!!

At another Aerosmith show, Steven Tyler kissed me on the cheek and I accidently stepped on Joe Perry’s toe. Sorry Joe. He didn’t look real happy about it…all the guys signed my very faded Get Your Wings album. I felt so rock and roll…minus the stepping on Joe Perry’s toe thing, of course.

Any bus trip that I was able to join in on makes the list…they are always a blast. Most recently, AC/DC at Conseco for the Black Ice Tour…holy geez those guys haven’t lost a thing!! Any Workforce Rocker that was on that bus trip would back me on that. Right?!

In a limo for Roger Waters at Verizon Wireless Music Center in Noblesville, IN. Thanks Barry, a.k.a. Sammy Hagar!! 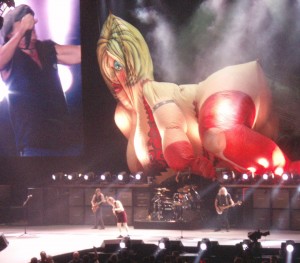 4) You recently quit smoking, how’s that going for you?

Soooo much better than expected. It’s almost a year-and-a-half now and I still want one. I hear that feeling never goes away. Bummer! And just about everyday I thank God for making me a non-smoker. Unfortunately, I think once and addict always an addict may apply to the smoking habit…it’s a bitch, man. Sorry I cussed, but you had to ask.

Does anyone have….just kidding.
5) Who do you look up to in radio?
Joe Blair hired me at WIKY in 1992, thanks to Brenda Whitney. She was PD for WJPS (oldies) then. Thanks Joe and Brenda!!
Ferran McCree will always be my girl. Mainly for her attitude and love…that girl is friends with all that is good in the world. Even though she isn’t heard on the airwaves, she is still my dear friend!! 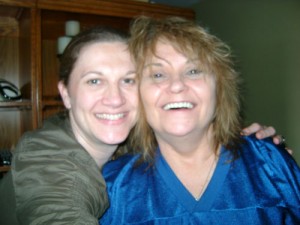 6) What’s your opinion about radio stations having syndicated celebrity DJ’s like Alice Cooper, Rick Dee’s, or Dee Snider instead of hiring local overnight DJ’s? Do you think it hurts DJ’s that are just starting out and are not ready for the dayshift drive time and need the experience?
I never thought of it like that before. This has all gone so fast and is a completely different monster than it was 17 years ago. Of course, with the economy the way it is, I think it’s the only choice for a lot of stations…with or without the coin and time to shape new talent. I’ve seen a lot of talent leave this market because there just wasn’t enough money to pay them what they are worth. That is only MY opinion. I love Alice’s show though. He is not a “radio voice” at all but no one can beat those stories, you know? 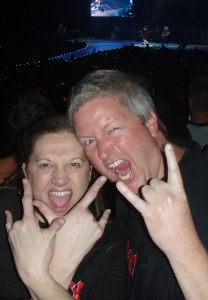 7) In keeping with our questions that we ask musicians, what’s the greatest “remote” you have ever done?
I know there was a lot of exciting ones for me personally, but naming a specific one off the top of my head….impossible.
Wait…I remember a remote I did for a WWE ticket thing at Robert’s Stadium. Even though those kids (of all ages) had been up all night (waiting for tix to go on sale), they were so very way cool. Little things like that make this job great. The people, the people…and not in a Sybil way.

8) And in the same vein, what’s the worst remote you have done?

All the ones where everyone wants the world and all you have is you…t-shirt, not good enough…etc. That’s always a bummer to me because WABX is my heart and soul…next to the obvious family and friend answer. So I do get a bit upset when someone doesn’t want a WABX something.
9) In your line of work, you get to meet a lot of Rock Stars. What artists have you met that just totally floored you in the sense that they totally weren’t what you were expecting.
I never had expectations meeting anyone. Mainly because, I never really get to meet a lot of rock stars. I wish I were around when djs were djs and worth something, and then I wouldn’t be able to start rambling at this time. Remember when everyone/rock act came to Evansville? If only I were a dj then. That would have seriously rocked. (Side note: Jimi Hendrix was at the stadium in…1969, I think…we’d have to ask Pat…he was front row. Hangin’ with Jimi back stage and taking in the genius…

Then there’s Led Zeppelin on any damn tour. I can see it now; becoming buddies with John Bonham and cruising with him all the time in that Trans Am…

Woooo…pull the reigns! I’m sure I would have frozen up like a Brady in front of the camera.

However, Kenny Wayne Shepherd…I loved him in concert but he came off as a true punk kid.
10) Do friends and family always ask for free tickets or passes to concerts, etc.? If so, does it get old?
Always and no. If they don’t ask, I won’t know if they want them. Most of the time, they know I can’t accommodate anyway…that makes it easier on all of us.
11. We would like to give you a chance to talk about what ever you would like to share to our readers about. Here’s your chance to “get Neked” with them.

“A Get Naked” I loved Methods of Mayhem…Tommy Lee side project. Mean ass, bad ass tracks. Check that out when you get a chance. Being VIP (not because of radio) for Ozzfest 2000 was soooo…..Methods were there and it was a beyond belief show.

Since becoming a mom, I’m easier to offend. When it comes to children, the world, animals, people and their feelings don’t hurt anyone. It’s not cool and it’s not right. I do believe in the good Lord and that if it wasn’t for him I would not have so many blessings to count on a daily basis. He gave me Floyd…the love of my life. Because of that we get to chill with Evie Rae daily. I could never, ever complain…but I will, I’m sure, because if I were perfect, I would make myself and everyone around me sick.

Don’t be mean, even if it’s because you are a mean person. I don’t buy that crap. Get a life and start counting those blessings that could be taken from you at any time! The pretty flowers, a hot guy/chick, a Jolly Rancher…the list goes on and on.
Bonus question: How close was WKRP to portraying a typical radio station and Is Shawn Roberts more like Herb Tarlek, Doctor Johnny Fever, Venus Flytrap or Les Nessman? And give us the reasons why.
Not this station. I work in a fine oiled machine-type atmosphere almost all of the time. I’m just glad they don’t mind me squeaking every now and then.

Sean fits all the above…Fever for his absolute, I did that…and he did. Venus for the this is me, dig attitude. Les for the “I’m on it”…but he actually is and it’s pretty cool.