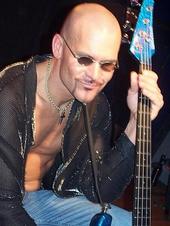 1. Hey Preston, welcome to Kickacts. com. Tell us a little bit about yourself.

Hi, I have been playing bass bass with Minx for about 10 years now, I have 2 beautiful daughters that I spend as much time as possible with, and I am also in to photography.

2. You play bass guitar in the band Minx. Tell us about the band and who is in it and the website address.

Minx is Bobby Friend on lead vocals, guitar and keyboards, Russell Mcgreggor on Lead guitar, Bobby (Skeeter) Barnes on drums and vocals, and myself on bass. The four of us have been together now for over 5 years, and it has helped solidify our sound, while at the same time, we have gained so much confidence in each other, that we can go out and just have fun! We are using our Myspace as our primary site, the address is www. myspace. com/minxrocks

I have a Modulus Flea Bass (still haven’t learned to play like Flea though:), an SWR 350 head and an SWR bass Monitor. I like to keep things simple.

We all get along great and most of all, we all love to play music! I think that keeping the same lineup helps tremendously, and we have a following that has become like family to us! Without our fans, we would be nothing. I have met so many wonderful people along the way, and I cannot thank them enough for supporting us and just being our friends!

Ahhh, Hogrock several years ago, we had the prime spot and I knew that we would have a killer crowd. I had planned before hand to buy a cheap $79 Kramer bass guitar and ignite it with fireworks, and smash it to bits on our last song! Everything was perfect, the crowd was rockin’, my adrenalin was flowing, and so I lit the fireworks and smashed the bass at the end of Freebird! The crowd went wild, and I was on top of the world! Wow, what a memory for only $79 bucks … uh, then I realized that I left my $300 dollar wireless plugged in to the bass that I had just demolished on stage! Lol! It was still a great memory though, and 4 years later, a woman came up to me and said ” Oh my god, you’re that guy that smashed your guitar at Hogrock, I still have the neck hanging on my wall!” so that made it all worth it!

Haha, there are several, but one that comes to mind was years ago, when we were really desperate for gigs, we went to a bar outside of Paducah, and they told us they were looking for southern rock, and I thought we could pull it off, but our version of southern rock was way different than what the owner had in mind! We got shut down while playing Rocky Mountain Way, and they made us pack up and go home! Lol!

7. You guys pretty much ruled Double Dukes for years and were their main band until they recently closed. With that gig came some hate or jealousy from other bands that couldn’t get in there. There were some pretty mean spirited messages on Band Nut about your band. Want to address that?

I don’t know why people would be upset at us for playing there so much, after all, we were just trying to stay booked, and Double Dukes was a good gig. I could see where they might take offense at the owners or management for not giving other bands a chance though.

I have always liked bands that put on a show! Alice Cooper is one of my favorites, but I also grew up with Kiss, Queen, REO Speedwagon, and too many others to mention. I just love music, and will pretty much listen to anything.

9. You are also into photography. How is that going? Do you do it professionally or as a hobby? Favorite things to shoot? 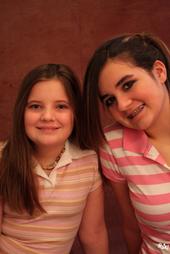 I am so glad you asked that! I have really gotten serious with my photography in the last few months. I have set up a studio in my house and have been doing portraits. Thanks to the power of Myspace, I have been getting emails every day asking me about taking some pics! I still have a lot to learn, but I feel like I am getting better at it, and hope to take it to the next level! If anyone wants to check out my work, it can be seen on my Myspace site www. myspace. com/minxbassist or my Taltopia page www. taltopia. com/minxrocks , hope you will take a look!

Just want to say thanks again to all the people that support the local music scene, keep it up! And thank you Kickacts, you have a good thing going! See ya soon!