1) Welcome to Kick Acts, Brian. Tell us a little about yourself.

I’m 36, originally from Marion, Ky. I have 2 girls and am married. I have been playing guitar since I was 10 and playing bars since I was 19. I played in country bands for years then I joined MINX I was lead vocals and back up guitar with them for 3 years. I stopped playing for 2 years and then formed Slick Willy. I have played in Nashville a little. I was showcased on Music Row for about 6 months but that did’nt last. Still have the desires of making the big time though.

2) You’re currently in a band called Slick Willy. Tell us who’s in the band and how we can find you online.

Dan Biggs, Steve Krietzer, and Kevin Woods and you can find us at myspace.com/slickwillybandrocks

3) What equipment do you use? 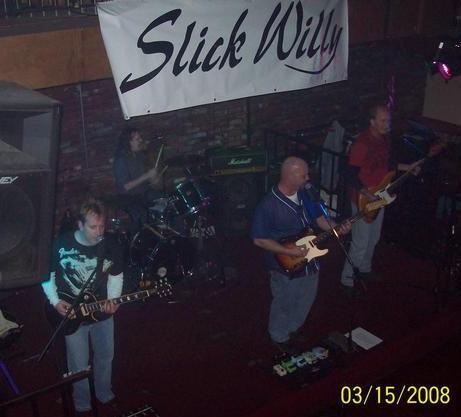 4) How long have you been a musician? Tell us about some of your experiences.

Since I was 10. The bands I’ve been are Rushin Heart, NightLife, Wide Open, Minx, and Slick Willy. Played with alot of start up projects that never got out of the garage. When I was in the band called Night Life we was one of 5 that opened for Travis Tritt in Metropolis Illinois. I have played guitar with the guitar player for Merle Haggard. I have met alot of songwriters in Nashville and became friends with a few that have wrote for Tim McGraw, George Straight, and Gary Allen. I set in on guitar with Wild Horses one weekend. They had a song out called “Ride Cowboy Ride”

When I was in MINX. We where playing Charles (Double Dukes now) one night and it was packed. Great house full of people. Anyway the drummer Shawn Chambliss had trouble being on time getting back on stage. Well it was hot, middle of summer, 3 sets into the night, and we where on break for about 15 minutes. NO SHAWN!!! So we waited and waited. Finally I got on the mic and said “Shawn Chambliss come to the stage. I did’nt even notice the side doors of the bar open. Someone from the crowd said ” He’s in the f@#kin pool man”!! He came on stage ‘Finally” and played the rest of the night in wet cloths. The next day he could not move because the wet cloths caused him to have rashes on his legs from where his wet pants where rubbing him raw. hahaha

Another was we where playing one night “in MINX”. The floor was packed and there was about 10 girls right up front. Of course Preston Buzzard, Shane Breedlove and me picked out a girl that was hot and kinda stood in front of her. Well she was trying to be sexy and she was until it happened. She unbuttoned her pants, pulled them down a little, and stuck her finger in her pussy. YES it was hot……………but then it hit us…………I SWEAR IT STUNK UP THE WHOLE STAGE!!!! In one motion we where all on the other side of the stage. hahaha

I had a band about 13 14 years ago called Night Life. We where playing at Hopkinsville Eagles( Yea I Know) and things where good but not great. Me, Shawn Chambliss, Darrel Cavinaugh, and Mike Perkins. Friday night we had a good crowd. Mike and Darrel got hammered. Darrell was the worst he destroyed almost every song we did. I could’nt take it. At the end of the 3rd set I decided to confront him and he started CRYING! So I backed off trying to just get through the night. Mike was a “Mad Drunk”. He was mad cause he felt I made Darrell cry. At the end of EVERY song I would look over and Darrel had tears just F#$KIN rollin down his face. The man is at the time was 42 years old. Anyway we finished the night with almost a fist fight in the parking lot. I ended up firing both of them on the spot.

We still had Saturday to go and I called Randy Stone to play bass. Never played or practiced together. We played 3 piece. We played Saturday night and I swear there was people coming up to us saying ” Yall are a lot better than that band they had last night, one bastard on stage was even cryin!”

To top it all off we loaded up. Sat in the parking lot and talked for awile. Then left. Drove half way home and realized during my talking I put my guitar down in the parking lot. Thats right left the F#$kin thing right there in the middle of the parking lot. Had to drive an hour back to get it. Thank God it was still there. Its not the best neighborhood.

7) What inspired you to become a musician?

I always loved music. Any kind. I guess my grandpa. He played. My Dad played and sang to.

8) Who are your musical heroes & why?

Stevie Ray Vaughn, Jeff Healy, Gary Moore, because of the emotion they put into their guitar work. Brad Paisley because he is just a bad ass guitar player.

9) Do you have any advice for someone just getting started in this musical era?

Don’t stick to one style. Buy the best gear you can find and afford. Find people who have the same direction as you and are MOTIVATED to help. Don’t be affraid to try something different. DON”T TAKE NO SH$T!!!!!

10) This one really isn’t a question, it’s where you get to answer what I didn’t ask. SHOUT IT OUT LOUD!

The economy is terrible. The government has to do something. People can’t keep this up. Obama, hope you can fix the f@#k ups!