Henderson Kentucky, founded as a town by the Transylvania Company back in 1797, is located right in a bend on the banks of the great Ohio river. This on going report is just my opinion on what is right and what is wrong with the City of Henderson. Well, not really the “City” of. It’s more a problem with the people that are allowed to make the decisions that affect everyone here and our great City. Henderson is rich in history but our City Leaders for the most part ignore the richness and concentrate on smaller issues of appeasing  some of the well to do influential people. Historical buildings are allowed to deteriorate and fall down or be purchased by rich businessmen and torn down in order to build another Pharmacy. I don’t really expect to change the world or even my “Town” with this article. I am a realist. I just feel like we have allowed the “Big Wigs” and their means  of making money to dictate whether or not something gets to “continue on” for the future generations of Hendersonians. I have plenty to speak about too. The Drive In theater, the train Depot, allowing Walmart to move  three different times already and abandoning shopping centers each time they move … etc.. you get the picture?

So welcome to Part 1. 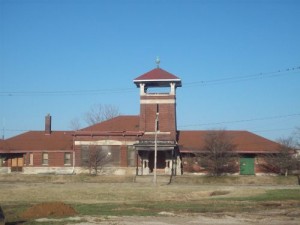 Located out on the outer edge of 3rd street and built in 1901. It has seen four Presidents, one Liberty Bell, and countless number of Soldiers returning home from the battle front during World War II. The train depot had been a popular stop over for many years. My grandpa has told me stories of catching the trains there and how beautiful the place was. Over the years as passenger trains fell by the way side the depot was used less and less. The last passenger train passed thru there in 1971 and the depot officially closed its offices in 1978. As usual, Henderson, like it always does to historial buildings, scheduled to have the depot demolished in 1979. Luckily, after an article was written in the Gleaner about it, some citizens came forward and contacted the Henderson Genealogical & Historical Society and eventually it was declared a Historical landmark and beat out the demolishing reaper at that time. Over the years it has had some restoration work done to it but the projects were never completely finished. Seems it was built on “weak” ground or something so it has some structure issues. Fast forward to “Today”. Henderson has been working on a riverfront beautification project for several years. A water park has been installed for small kids and that is actually a good thing. My Grand kids enjoy it too. A river walk also has been built. It’s nice to walk through the park in the evening. OK, on to my point. There was talk about relocating our famous and Historical Depot to the river front. But as fate would have it, it was decided that it would be expensive to move it. So instead of investing in our Henderson heritage, it was decided by our city leaders to build a “replica” or as I would say, the “fake” one at the river front. So it was built and it’s a nice looking fake one. So now we have two depots. The real one sits over off third street like an old  friend though boarded up and waiting for some one to restore it to its natural beauty. 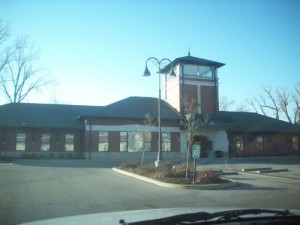 Think about it for a second. It would be an awesome tourist attraction for Henderson. It’s a part of our rich history. But instead, a fake one has replaced it … Nothing is as good as the original. Henderson even has a website about the fake one … Their front page has this written on it, “Located in the heart of Henderson, the Depot is a replica of the original train depot built in 1901 and stands as an example of the city’s commitment to preserving the past while embracing the Future”. I call B.S. to that statement. The Real Depot is still there. It’s not advertised anywhere so no tourists that stop here know it’s still around. No tours go by there other than the Halloween haunted tour once a year. So, this concludes Part 1. The new depot though brand new and shiny is not a part of our History. It is an imposter. You don’t see Egypt building replicas of the pyramids do you? No, so why should we for our pyramid? We shouldn’t. We should spend the money and restore it and show it off proudly. So in this instance, Henderson made a “wrong” move in my opinion …let’s go build another pharmacy. OK?