1. Hey Al, welcome to Kick Acts. Tell us a little bit about yourself. 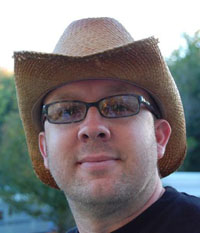 Let’s see, here’s a quick overview. I was born in Morganfield, KY but grew up in Uniontown. Took up music at the tender age of 12. I started out on trombone but switched to drums in high school. Graduated in 1988 and joined the US Air Force that summer and did two years in Germany & 4 in Colorado. I moved to Evansville in 1995 and started taking night classes. I eventually earned a BS in Computer Information Systems. I took up bass guitar in 2001 and started the band Chowder Monkey with my friend Ron Mattingly (who happens to be married to my cousin Tammy!) way back in 2003. Oh, I’ve been married since Valentine’s Day 1994 and I have a 12 year old son. How’s that for Big Al in a nutshell?

2. You play bass guitar in the band Chowder Monkey. Tell us about the band. Who is in the band and your web address.

Like I said above, I formed Chowder Monkey in 2003 with my friend, Ron Mattingly. It took us a while to get a steady lineup. You know how it is in a smaller music scene. Anyway, the current lineup is me on Bass & Vocals, Ron Mattingly on Rhythm Guitar & Vocals, Susan Ashby on Vocals, Chris Keck on Lead Guitar (and lead vox on one tune!), Sean Bingham on Drums and last (but not least) Paul Hollingsworth as our sound guy and occasional drummer. We play stuff ranging from Pat Benatar to KISS (who’d have thunk it) to Weezer to Georgia Satellites. Our web address is www.chowdermonkey.com. You can also find me on Myspace.

I have a Peavey Millenium Bass that I just love and it’s the only bass I play live. My amp is a Gallien-Krueger Backline 350 with a 4-10 cabinet. I have other basses but they’re just cheapies I use for practicing.

4. You served in the Military. What branch and got any great stories to share with us about you time in the service? 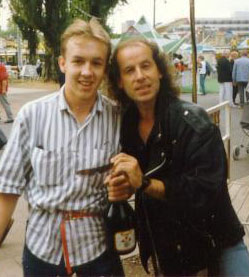 I was in the USAF from August 18, 1988 until April 1, 1995. The two years in Germany were very memorable. My very first experience over there was major culture shock. Do you have any idea how frightening it is to step off the airplane and no one can understand what you’re saying? HAHAHA! There are tons of stories from my time over their but there are two that really stand out. On my very first deployment, I got to drive a deuce and a half (2.5 ton truck) and pull a water tank. Anyone that’s ever hauled liquid can tell you how long it takes to stop one of these tanks. As we’re coming off the Autobahn (yes, THAT Autobahn) onto a cloverleaf, this dumbass in a Porsche cuts in front of me and locks up his brakes. I told my passenger to hang on because “I ain’t swerving!” and I locked up my brakes. That truck was bouncing up and down something fierce. I was scared to death. I hope the guy in the Porsche shit his pants! I managed to get stopped inches from his bumper. — The other story comes from another deployment where they finally gave us 6 man tents and diesel heaters! I’d pulled the 4th or 5th 12 hour shift in a row and I was exhausted. I went back to my tent and made myself a turtle on my cot in my sleeping bag right next to the heater. I don’t know how long I’d been asleep but I was awakened by my sleeping bag hitting the ground and me being dragged. Freaked me the hell out. I thought I was getting hazed. Turns out the heater caught fire and was taking the tent with it. Thanks to whomever it was that dragged me out of there.

You know, my greatest gig doesn’t even involve either of my current bands. Anybody that knows me knows that KISS is my all time favorite band. Always has, always will be, no matter what ‘shenanigans’ they pull. Anyway, at the 2004 KISS Expo, I got to be the bass player for the unmasked KISS tribute band. It was my first time onstage as a bass player. Jim Cauley was on drums, Dave Newton on Rhythm Guitar & Vocals & Mike Fisher on Lead Guitar & Lead Vocals. We were joined on stage by Ron Keel & Bob Kulick. I have it all on video. Good stuff. (If you want a copy, holler at a brutha!) How’s that for a greatest gig. Not bad for the first time.

6. And in the same vain, got any “worst gig ever” stories to share?

The worst gig wasn’t really that bad, considering we weren’t well rehearsed and we were pressured into playing. We did a charity even opening for Ass Scratchin’ Rodeo Band at Double Dukes on a Saturday afternoon. We weren’t even a full band yet and had to beg Ron’s son Ty to sing for us. Anyway, during the first two songs, Ron was by the back door which they had opened and the heat messed with the tuning on his guitar so for the first two songs, we weren’t in tune with each other. The rest of the gig was fine. See, not a terrible worst gig — and that’s fine by me. 🙂

7. You work at the Library in I.T. and also have your own computing services. What type of services do you provide? And have you seen any ghosts at the library?

I’ve been the “IT Guy” at the Newburgh & Chandler Libraries for almost 12 years. It’s a great job. As for the side work, right now I primarily concentrate on web hosting. I also troubleshoot and fix computers if they aren’t too screwed up. No ghosts in Newburgh, you have to go to Willard Library on First Avenue for that one.

My dad got me hooked on rock & roll at a very young age. Both my parents are music lovers so between mom’s “old school country” and dad’s love of rock, it was inevitable that I would be a rock & roll junkie. I’d be lying if I didn’t say Gene Simmons was the reason I picked up bass guitar. He kills me on some songs when he plays an open A when he’s not singing and then when he starts singing, play something that required effort. Well, he used to be that way. Also, from the drummer point of view, I loved Peter Criss as a kid but Eric Carr was my hero! When he died, I was crushed. I was always jealous that Eric could do the double bass thing. I have shit for balance and would fall off my drum throne every time I tried that! I also have a great deal of respect for Eric Singer. Of all three drummers, Singer has always been the most consistent drummer in KISS. He’s a top notch guy to boot.

9. You are one of the two main people behind KickActs.com. What are your intentions with that and what is it all about? 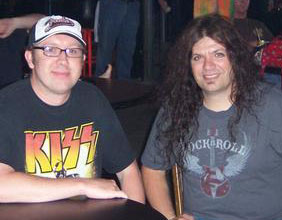 When we first started the site, it was primarily focused on reports about the local music scene and indie music but it has since grown into a site that features politics, religion, humor, music and lots of other stuff. I am very pleased with how much traffic the site gets. I also dig the feedback from most of the people who post comments. Although I really shouldn’t be, I am surprised at some of the negativity that we’ve seen posted in some of the comments. For the most part though, the site is doing well and I look forward to getting more writers on board and expanding to things like food reviews and stuff like that. If any readers have any suggestions, hit us up.

First and foremost, I want to give a shout out to my wife & son, Laura & Ian, for putting up with my musical insanity. I’d also like to give a shout out to John Hussmann. He’s been helping me put melodies to the lyrics I’ve been writing. Eventually, I’ll have an album to unleash on the world, for better or worse. I can’t forget my homies in Chowder Monkey & Yellow Short Bus, the two bands that keep making me a better bass player.

11. Bonus Questions. You have hosted a KISS Convention or two here in Evansville. How did you get involved in that and got any great stories about it? Ever meet Gene Simmons and is he really a dickhead in person?

I did my first KISS Expo (can’t call ’em conventions since Gene trademarked it) in 2002 with Bruce Kulick as my guest. That Expo was (no pun intended) a trial by fire. Oh Mr. Wise one here had the idea that since Gene wrote Calling Dr. Love in Evansville at the Holiday Inn, what better place to hold the Expo. I wasn’t aware that the Holiday Inn had been relocated from a few miles down the road. That marketing idea was shot down the tubes. To make matters worse, I booked the venue in February on a cloudy day and the Expo was on a hot sunny day in July. The room was like a sauna with the big tinted glass roof. The sound guys didn’t show up until after the event started so everything ran late. Someone else had booked some side rooms for some kind of testing and they kept complaining that we were too loud and the Holiday Inn staff kept insisting that we turn down even though loud music was written into the rider. We didn’t turn down. I also learned a valuable lesson on the importance of advertising. The 2003 Expo was at the Marriott, I hired Curtis & Eric from Pro Audio to do sound and had a much better turn out.

I got the idea to do the KISS Expos waaaay back in 1995 when I went to the “official” convention put on by KISS. I met both Gene & Paul that day and I was very fortunate to meet them when they were “hungry” again. They were really nice and took time to talk to everyone. That doesn’t so much happen these days now that the reunion tour and the farewell tours have taken place, they’ve changed how they interact with fans. 😉

12.  You’re also a D.J. on a classic internet radio station. Give us the scoop and where we can find you online.

I do a Wednesday Night classic rock show online for Rock 1 Radio. The station plays all kinds of rock, not only classic rock. You can find us at www.rock1radio.com. I actually got my start on a now defunct Internet radio station but it really helped me hone my skills as a live DJ, although I’m still just a hack. From 1998 or 1999 until 2004, I ran a Live 365 station called Hair’s To The ’80s that played glam, rock, pop metal, heavy metal & hard rock. That’s where I learned proper encoding and ripping techniques, along with how to get screwed over after helping build Live 365 from nothing. Ungrateful bastards. Live & learn.