1. Pat, welcome to Kickacts.com. You’re a DJ at Power Rock 93.9 WKTG. How long have you been there and is it the only station you’ve ever worked for?

Thanks Chuck. Damn, is my rookieness that obvious? Seriously I’ve been at KTG for two years now and yes it is the only station I’ve ever worked. My first real job in the world was being the janitor at this very station when I was but a lad. I was terrible as a janitor because I just liked listening to the music and trying to figure out how the hell the dj’s did what they did.

2. On the station’s website, there is a photo of you playing guitar. Can you give us some background on it? Do you play regularly and do shows around town? What type of music do you play. 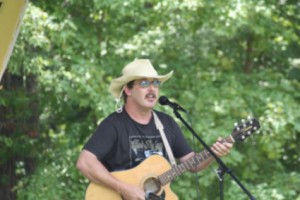 I’ve been playing for fifteen years or so. Mostly acoustic stuff but lately I formed a rock and roll band with electric guitars and drums and high decibels for making the ears bleed. I have varying tastes in music. I like singer/songwriters like Bruce and Petty and Neil Young, Bob Seger, Dylan. I like doing originals when I play out somewhere, but always throw in covers. I like to play obscure stuff when out playing rather than what you’ll hear on the radio, although we will take requests on occasion. I play in an alt/bluegrass band called Plowin’ Todd Cowan and the Sodbusters and, as I said, a rock and roll band called PB&J. We’re all available for gigs if anybody wants to book us. Just call me at the station, but get hold of me quick because the world tour starts in the fall. We’ll be playing various missions. Captive audiences, ya know. We even have a stop at the Stuckey’s right outside of Possum Trot, Tennessee. Our biggest venue on the tour is pretty special. We play the petting zoo at the rest stop just north of Fargo.

3. There is also a photo of you flying an airplane. What’s up with that? Are you a part time pilot too or just trying to take out birds in flight every once in a while?

They actually let me fly the damn thing. Ryan at Don Davis Aviation wouldn’t let me do barrel rolls, though. 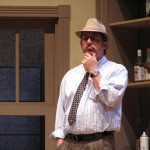 work with a theater group. What do you do there and what is it about?

It’s not a theater group per se; I’ve just auditioned for a couple and got some parts. I was Fezziwig in “A Christmas Carol” and I got to play in the “Odd Couple”. My character liked to drink, smoke and play poker, and since that’s nothing like me I had to really research the part to accurately play “Roy”.
5. Who do you look up to in radio and why?

Mostly my co-workers here at the station. They all have a million years experience so I’m always picking their brains. Some have been here since I was a kid pretending to mop the floors. Bill and Kevin have been doing this a hell of a lot longer than me, so it’s always good to listen to them and try to pick up ideas along the way. I really like Red Beard with “In the Studio” as well. The way he puts the show together really makes it flow and he always has great artists on the show.

6. What’s your opinion about radio stations having syndicated celebrity DJ’s like Alice Cooper, Rick Dee’s, or Dee Snider instead of hiring local overnight DJ’s? Do you think it hurts DJ’s that are just starting out and are not ready for the dayshift drive time and need the experience?

I really can’t say whether it hurts DJ’s or not. Those cats are all good. If I get bumped for someone like Cooper or Dee’s, oh well, no biggie. I just try to remember that it’s not about me; it’s about the music and the listeners. Our listeners are the greatest. They make my job easy.

7. In keeping with our questions that we ask musicians, what’s the greatest “remote” you have ever done?

They’re all good. Ya get to meet the listeners and get to know folks a little better, put faces to the voices that call in. It’s cool.

8. And in the same vein, what’s the worst remote you have done?

9. In your line of work, you get to meet Rock Stars. What artists have you met that just totally floored you in the sense that they totally weren’t what you were expecting.

Got to meet Billy Gibbons from ZZ one time in Memphis….also big Bubba from the old Miller Beer commercials. His hand was as big as my head. Danny Hutton of Three Dog Night was my first rock and roll star interview and he was damn cool to talk to. Playboy’s Miss May AJ Alexander was quite a treat. Yo AJ….Holla!!! There’s a picture of her on our website www.wktg.com (shameless plug) I think Tommy Stillwell eats guitars for breakfast. He and Larry Grisham of the Beat Daddy’s were really cool.

10. Do friends and family always ask for free tickets or passes to concerts, etc.? If so, does it get old and how do you get out of it?

Yes they ask, no it doesn’t get old, and no they never get the tickets cause down deep I’m a real ass….uhhhh, love ya mom….no…I’ll try my damndest to get tix for folks, but mostly we get enough to give away on the show and that’s it.

Radio has got to be the coolest job in the world. What makes this job so killer is the people. You know…the folks that really make the country the greatest place on earth to live. No bullshit, they really do make my job fun. People calling in every day for really cool songs that I prolly wouldn’t have thought of in the first place. I really like playing music as well and anytime I get to play out somewhere it’s a good time. I was serious about the gigs, if you need a band for something; call me at the station (270-821-1156). I know a lot of local talent and some great bands. That’s another thing about radio. All of the talent right under our noses here in the tri-state. I’ve traveled all over the country and have not seen the talent anywhere else like we have here. If you are a band, send me a demo with contact info. I listen to everything. No promise of airplay, but feedback is free, even if it pisses you off.

What song do you have to play that you absolutely hate “spinning” and if you never played it on the air again you could die a happy man? And on the same token … what song, no matter how many times you hear it still makes you hard?

Sorry Chuck, but I’m not taking the chance on that first one. As for the second question:

Anything The Beatles or Led Zeppelin ever did.