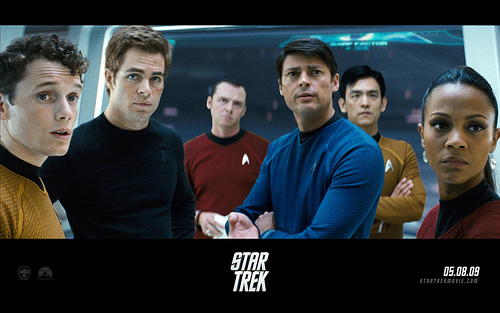 First up. I am a huge STAR TREK  TREKKIE….OK? So let’s get that out of the way. I have followed the evolving series since I found it in reruns as a kid way back in the 70’s. Long before some of the props that are in existence now due to STAR TREK were even invented. Need an example? The hand held communicator. Today it’s a cell phone and comes complete with a flip top. So there …

This morning I received my copy of STAR TREK;) I would recommend seeing in the theater first but since I couldn’t get my wife to go … 🙁 I went for second best.

Well, I stuck it in the DVD player, turned the sound up loud like it’s supposed to be and got ready !! I wasn’t disappointed. From the word go, it rocked!!! Lot’s of action, some humor and the characters are easily identifiable too. I was hooked from start to finish. Even with the role of the original Mr. Spock also written in (Leonard Nemoy for you without an imagination) was awesome!! It wasn’t a “cameo”. His role was important to the script. The movie shows how fate, or is it destiny, together one by one.

As you know by now, I won’t give away any of the plot to any movie review so if thats what you are looking for, I am sorry. This movie is well worth seeing on the big screen and then buying it on DVD when it comes out!!!